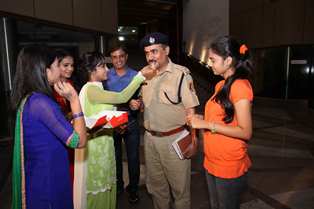 Rakhi is tied to anybody whom you trust with protecting you. Giving a whole new meaning to the festival of Rakshabandhan, cast from Colors latest offering, Shastri Sisters visited the city of Delhi to tie Rakhis to the Delhi police to iterate their trust in the force.

A story which traces the bond between four sisters during tough times, has narrated their journey from the small city of Kanpur to the capital city Delhi. The four Shastri girls, Alka (played by Neha Pednekar), Anushka (played by Ishita Ganguly), Devyani (played by Sonal Vengurlekar) and Peeya (played by Pragati Chourasiya) along with their widowed father, Narayan Shastri (Rajesh Jais), move to Delhi unaware of what life will be throwing their way. Life becomes difficult for them as all four sisters face separate problems in the form of love, bullying by peers and landlord problems. Just like the Willow tree, they stand solid to the ground together as challenges find their way into everyday life for the girls.

Commenting on their visit to Delhi, Neha Pednekar, essaying the role of the oldest daughter Alka said, "Tying a Rakhi to someone signifies that you trust the wearer of the Rakhi to protect you. When we shot for Shastri Sisters in Delhi in June, we all felt a sense of safety thanks to the Delhi Police and thought we should honor their work!"

Ishita Ganguly, who plays the role of the second sister Anushka, said, "I have another scene in the show where I tie our father Narayan Shastri a Rakhi as a gesture of gratitude. I strongly believe that Raksha Bandhan is meant to strengthen the bond with anyone who protects you."

Speaking about a similar track in their show around Raksha Bandhan, Sonal Vengurlekar, playing the third sister Devyani said, "Even in the show, we will be seen tying a Rakhi to the Delhi police. I believe that Raksha Bandhan is an occasion that signifies protection in any form. I salute not only the Delhi police, but the police and armed forces across the country!"

Pragati Chourasiya, essaying the role of the youngest sister Peeya said, "In the show, my older sisters guard me with their life. Since I have always been the most protected one, I feel that this festival means the most to me."

Masht 6 years ago Hats off to police and armed forced across the country.

Shastri Sisters is a wonderful show..which highlights many qualities in Indian families. I am happy to read these comments by my beloved actresses: Ishita Ganguly, Sonal Vengurlekar, Neha Pendnekar and Pragati Chourasiya.

Bee3nazz 9 years ago and remember that you are now on a different level than then, your much appreciated for ur acting and are less likely to be cut for popularity reasons cos ur fan base is big enough to rival most others now!!!

sweet_angel27 9 years ago oh, wow I thought Kareena being in the film was a problem for him?

-veena.shona- 9 years ago i really hope Shahid accepts to do dis movie!
it wil prove to b gud for his career!

zara_11 9 years ago Shahid i really hope that u accept the offer. Pleaseee go for it.