Rakhi Sawant and her Chiller Party won the biggest dance war Vodafone Yeh Hai Jalwa on June 15th, 2008 at Filmalaya, Mumbai. It was indeed a moment to cherish for Rakhi and her kids as the Queen of Bollywood Rani Mukherjee handed over the coveted trophy. 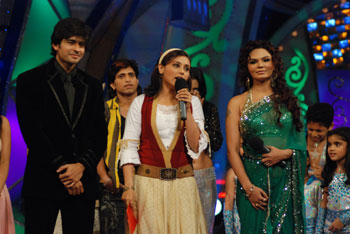 Featured Video
How do you feel after winning the dance reality show Yeh Hai Jalwa?
On top of the world!! I have never won anything in my life. This is my first success and
I thank God and my fans for giving me this chance. I also want to congratulate 9X for ensuring a fair competition. There were no saas bahu characters out here, and every one of us got to be ourselves. Bhagwan Ke Ghar Main Der Hai, Par Andher Nahi!!

Do you see this result as a fitting reply to Nach Baliye?
God bless them!! I don't want to say more at this moment except that I never lose heart, hence took up one more reality show after Nach Baliye.

What is the reason behind Rakhi taking up so many reality shows?
Public knows and loves me as India’s reality queen. The reason why I did so many formatted shows like Big Boss, Nach Baliye and now Yeh Hai Jalwa is because they are real. Sometimes I do naatak, but the public graciously forgives me, for they know that nobody is perfect.

So what was your mantra in this competition?
I always believe in hard work. Our record here shows that we have performed well from day one. But having said that, we worked really hard for the finale round and stretched ourselves further. Any south Indian will tell you that the classical dance form of Kuchipudi that we performed on can’t be mastered in a short time. But this item girl has proved them wrong. We even took the risk of using lota as prop. I can say that we overcame all hurdles and came out as winners…

But were you not weary of the fact that the other two finalists were very popular personalities on television and they might have the advantage of securing more votes?
Come on, they play positive characters on screen, while I am good in real life too. Many after winning such shows take the money and go home; I on the other hand always try to help the needy in my limited capacity. 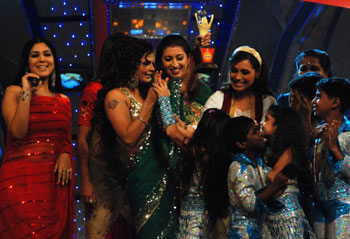 When you were asked to mentor kids in this show, did you at any point feel let down?
Forget kids, you give me anyone, whether it is oldies or college kids, I will make them into great dancers. I have this God given ability to make any one groove.

How do you plan to spend the 25 lac booty?
Firstly, I will earmark a substantial sum around 10/12 lac for my chillar party kid’s education. This amount will be deposited in fixed deposits, so nobody can cheat them.

How was your experience to share stage with the versatile Rani Mukherjee?
Rani brought the ultimate magic and made we win, what more can I say? I really love her. In fact, Shahid, Rani and I are coming together in a movie.

What next in TV?
I have two talks shows lined up, one for Zoom and the second for Zee Next.

It’s now your beau Abhishek’s turn to excel in Zee’s Ek Se Badhkar Ek…
I am very happy for him. We started together, but unfortunately he did not get his moment under the sun till I won here…

Lastly, have you forgiven Abhishek for entering Jalwa?
I forgot that the moment he got eliminated..

14 years ago congo rakhi u rock the floor always.keep up the goodwork.

+ 3
14 years ago thats so cool, she sure deserves the win, nice interview....thanks

14 years ago she really deserved to win. so many people were looking down on her during nach baliye. they used to talk down to her and she didn't deserve that. now she has given them all a fitting reply. rakhi truly rocks!!!

14 years ago love u rakhi!!u deserve every bit of ur success.

+ 4
14 years ago She does get into nautanki a lot of times and talks so much more than the needed but still, somewhere shes good at her heart...and thats wat shud matter! :) Congoo to her!! :D :D