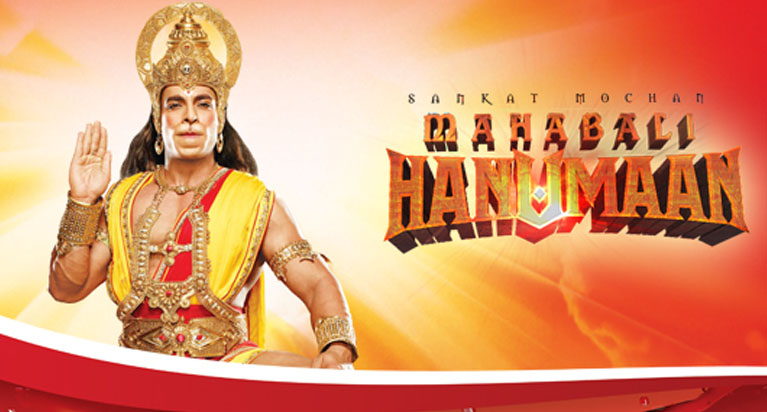 Sony TV's latest offering the magnum opus Sankat Mochan Mahabali Hanumaan' has grabbed viewers' attention with its concept and grandeur treatment. Produced by Contiloe, the life journey of the mightiest god Hanuman shown in the most opulent manner grasped everyone's eyeballs from the first episode itself!  Right from the performances to the magnificent sets and costumes, the show is surely one visual delight!
Exploring a mix of untold and popular mythology around Lord Hanuman in a never seen before format, what sets the show apart is its attention to details.  Keeping in mind the mythical treatment, the diction of the dialogues has been excellently worked on. The show started with a powerful narration of the life journey of lord Hanuman giving viewers a sneak peek into all the epic characters.
The talented Nirbhay Wadhwa who was last seen in the historical show Bharat Ka Veer Putra Maharana Pratap has made a mark on the small screen with his acting skills, is the perfect fit for the role of Lord Hanuman. Joining him is Gagan Malik and Deblina Chatterjee are magnificent as Ram and Sita in the show. Transition of Gagan Malik from Krishna to Ram is definitely one of the highlights of the first episode! He certainly has worked very hard on his diction for  all three avatars (he is also playing Vishnu in the show.) Known for her good looks, Barkha Bisht Sengupta stole the viewers' attention with her on-screen presence as the mother of Hanuman, Anjani. What we are looking forward to is Arya's fiction debut on TV and him playing Raavan. Moreover from the ads, the Bal Hanuman looks extremely cute. Hope the viewers to get to see more of him soon too.
Unlike the other mythological shows, the use of art visual effects (VFX) and stunts to tell this great tale of Sankat Mochan Mahabali Hanuman leaves an impact on the viewers. This is for the first time such brilliant effects have been used for a television show and hence the overall experience of show viewing is rich and impressive!

+ 3
3 years ago Will Miss You Gagan and Deblina.
and Nirbhay.
SMMH Is A Fantastic Mythology.