Debina Bonnerjee, better known as Sita of Ramayan on NDTV Imagine has a huge fan following. But very few people know that the actress is a trained Kathak dancer. And even fewer know that she was smitten by the glamor world seeing Sushmita Sen win the Miss Universe crown. 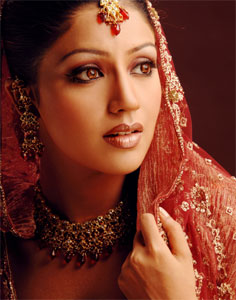 Featured Video
When offered the role, the actress was very excited to take up the challenge of playing a pivotal role of Sita Devi. Speaking about her auditions Debina says, "I had done many regional movies. Gurmeet acted with me in a Tamil serial, Mayavi. The CD of the serial was given to Sagar Arts and seeing that they selected us for the roles. "The funny part is that I did not even know that I was auditioning for the role of Sita", says she.

When asked how it feels to play a character that was popularly played by someone else before, Debina says, "It was very challenging for me to play this role. But as far as convincing my audience goes, I am sure that my audience will accept me, and Ramayan is the first mytho in this era. It was different and hence I took up the role. Not only that, people already have a fair knowledge about the epic, so it's easier to essay the role. The main thing here is to give our 100% to the role."

The young lass has participated in several beauty pageants in Kolkata. And with the support of her parents, she moved to Mumbai post her graduation and earned a Diploma in Public Relations from Bhavan's College. Annotating on her role further, she quips, "I never wanted to play any role in television dailies. In fact like I said, I did not have any idea that I was auditioning for the role of Sita Devi. When selected, I realized how important this role was. This epic has always been close to my heart and to bag the role of Sita Devi is like 'icing on the cake for me'.

As the actress signs out she leaves us with some food for thought saying, "There are still miles to go before I sleep."

14 years ago thanks for this interview. she doing great as Sita

14 years ago Thanks for the article, she is indeed very pretty!

14 years ago thanks... she looks really pretty in the picture!

14 years ago she is beautiful but a bit aunty types, as she won''t be able to a notorious role!!!

14 years ago wooow...its always gud to see the interview of our favorite again and again...hoping to see gurmeet''s interview over here