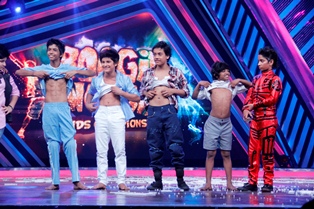 The upcoming episode will see, Shilpa Shetty and Harman Baweja make an appearance on the show to promote their upcoming movie 'Dishkiyaaoon'. After watching the dance performances Shilpa said, "Boogie Woogie is the only pure dance reality show and is the best amongst all."

Later host Sargun Mehta also revealed that all the boys on the show have six pack abs. On Shilpa's request, Abhishek, Aryan, Sachin, Sagar and Mumtaz make their way to the stage and flaunted their prized abs. In fact Shilpa also requested Rakshit Wahi to show his packs too. When a shy Rakshit hesitated to do so, the actress gave him an offer to get personal training under her.