View Profile
The legendary actor, Mithun Chakraborty's son, Mimoh had his first tryst with showbiz when the actor, who has a fea 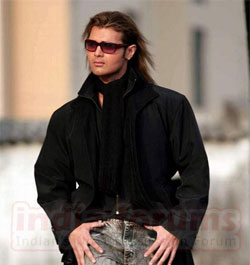 Featured Video
r for height, agreed to film an action sequence for the film, 'Jimmy', but found himself on the receiving end, with a muscle pull on his right leg.

Talking about the terrible incident, Mimoh states, "There was a fight scene where I had to jump from a door. I told Mehmood sir that I will do that and in spite of my fear for height, I did that and the muscle of my right leg got pulled. All became anxious as I had to be taken to the hospital. I had to go through X-ray machines and also a course of injections".

But how did Daddy dearest react to his son's accident? Well, a true artist that Mithunda is, he indicated to Raj Sippy that the show has to go on, come what may! Recollecting his dad's dedicated reply, Mimoh says, "Daddu sir (Raj sippy) called my dad and informed him about my injury and in reply, my dad said that if his left leg is ok, then shoot with his left leg, but the shoot should not get cancelled".

Going the way his dad wished, the actor son finished all the pending scenes without even a wrinkle on his face, with his painful leg. The young lad now smiles thro' the incident saying, "Pain makes you stronger".

Well, he is surely a brave lad and an obedient son too!!-(SAMPURN)