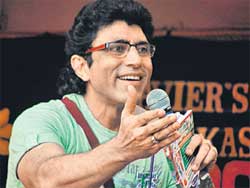 in some biggies of television; one of which is Ved Thappar who was last seen enacting the famous character of Raja in the most loved detective series of Raja Rancho after a long break will now be seen presenting a pivotal role in the forthcoming show

According to our source "Ved Thappar aka Raja of famous Raja Rancho duo will make a comeback on television with this show. He will be playing pivotal role in the show he is coming back to small screen after Raja Rancho."

Ishan. 10 years ago i used to love Raja and Rancho !