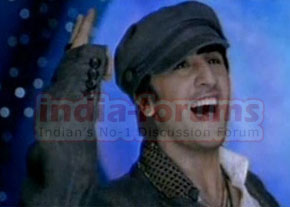 There's something in the genes, or perhaps, it's the goodwill of the legendary Raj Kapoor that the audience is always curious about the members of the family. And down the generation, as Raj Kapoor had said, "the show must go on".

Three generations have doubtlessly kept the magic alive and after Karishma and Kareena, finally the man of the fourth generation makes his debut in "Saawariya". Ranveer is the son of Rishi Kapoor, son of Raj Kapoor, and Neetu.

However, Bollywood is no more the same. Now, every newcomer, even if from the Kapoor clan, has to prove his worth and woo the audience. Ranveer, too, faces strong competition from other debutants who seem to be equally talented.

But Ranveer is very placid about any hint of rivalry in the industry. He takes all other newcomers as his friends, so there's no question of envy or competition. All that he believes in is good acting. He is even selfless enough to wish well to all other actors who are starting their careers more or less at the same time.

"Saawariya" is Ranveer's dream debut with a big name like Sanjay Leela Bhanshali. It has been quite a wait too. He had earlier rejected Khaled Mohammed's "Fiza" and Shah Rukh Khan's "Main Hoon Naa". Going by the way he is being launched, guess it has been worth the wait. -