The popular mentor in Zee’s SaReGaMaPa, Pritam Chakraborty suffers from a kind of chronic illness. Are you shocked? Well, the very soft-spoken musician has a habit of forgetting things too often!! 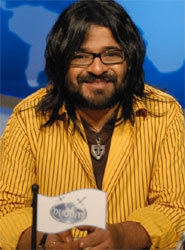 Featured Video
This is surely a big concern for the man, but he laughed it off when the SaReGaMaPa team read out few incidents, where he has forgotten even the minutest of details.

Satish Dutt, Director of SaReGaMaPa says, “When we read out the instances, there was a laughter riot on the sets and everyone present there acknowledged that Pritam is forgetful. For example, his wife told us that, once he was standing in his 6th floor house when he had paper in one hand and his mobile in the other. Instead of throwing the paper out, he flung his mobile from the 6th floor. Another very funny incident is that, he came to the sets in his vehicle, parked it before the studio and then while returning, he took a rickshaw, went home and then realized that his vehicle was stolen and rushed to the police station and even lodged a complaint, when his vehicle was cozily parked before the studio”.

When he heard all the anecdotes, Pritam confessed on the sets of Zee SaReGaMaPa that it is so bad that, “I have my meal and then after few minutes, I again sit to eat forgetting that I have already eaten”.

Says Himesh, “He is a bhoolakkar, that’s why he did Bhool Bhullaiyaa…”

Whatever it is, even if Pritam’s forgetfulness grows, his popularity amongst people also continues to grow as his compositions climb the charts higher and higher…..

14 years ago that's hilarious... poor guy, that is a serious illness!!! lol

+ 5
14 years ago Hes a Musical GENIUS! Period! All Geniuses are crazy! lolz

+ 3
14 years ago interesting article... Pritam is a gr8 music director!