On May 1st, 2011 the course of history has witnessed another monumental escapade in the making - one that will luckily go down in gold, not gore!

The man who was perceived unanimously as the face of global terrorism finally met his demise at the hands of US military operatives. It is a substantial win in the US War on Terror and millions across the globe continue to celebrate 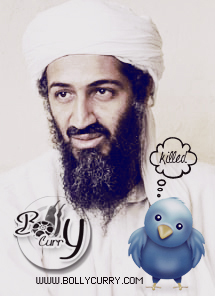 
When all forms of media are abuzz with this headline making news, how can the rapidly burgeoning Social Networking be left behind?! One cannot go on their Facebook, Twitter et al accounts, and not be witness to discussions and jubilation galore.

The trend has been kept up by B-Town celebs.

Bringing you some of the fastest, and most prompt public statements from the who's who of tinsel town...

"Afghanistan,Pakistan,Iraq. Wounds opened up in name of Osama. Will they heal now tht Osama Bin Laden is officially dead?"

"On the day the advance booking of Haunted began. Osama Bin Laden was hunted down and killed in Pakistan!"

"Since Osama Bin Laden is dead, now may the World Rest in Peace (R.I.P)."

"Have they verified its actually his Body? I think all governments should call for an International Holiday!!"

"Osama Bin laden is not dead.He's on this train with me.Doesn't look like he's showered in a while.Wait wait my bad.It's Makrand Deshpande." followed by, "Osama IS Dead.The proof is Overwhelming.Especially the video of him saying 'If you dont believe I am dead, I will kill all you infidels'. " and finally "I think America did this so that twitter could increase revenue with their latest twitter Contest. 'Best Osama is Dead Jokes'."


RGVzoomin Ram Gopal Varma
Whatever the future of terrorism is after the death of osama I am right now so very very very happy fr America..3000 CHEERS!!!

ameesha_patel ameesha patel Hope the news is true about osama being dead. N it isn't an impostor that monster capable of anything

Sophie_Choudry Sophie Choudry
What an historic day! Obama shows he means business as the ideological face of Al Qaeda,the most feared man in the world is killed! Osama
This doesn't mean the end of terror & we shd be aware of that! Incidentally body already disposed of so no physical proof either!


kunalkohli kunal kohli
The U.S does a covert operation in Pakistan,with their support & gets Osama,why can't we get the Mumbai serial blast & 26/11 masterminds ?


AnupamPkher Anupam Kher
Kudos to America's intelligence and security forces for Operation Bin Laden. It is important to pursue goals and then achieve them.:)


That's the update from the active socials of B-Town. We trust there will be many more coming... Meanwhile, don't forget to share your own take on the history making matter!

Huma Qureshi Loses Cool; Says She has been 'Unnecessarily ...
28 minutes ago

2020 is Turing Out to be a Fruitful Year for Prabhas!
28 minutes ago