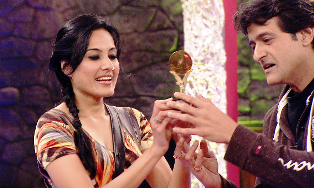 We have seen the Bigg Boss contestants entertain and enthrall everybody for the past nine weeks. They fight, they bully each other and at times, they even love each other. Their peculiar personality traits make each one of them different than the other; some whom we just love, while some whom we just love to hate. Keeping this in mind, Bigg Boss called for an awards night to compliment all the housemates for their unique qualities that make them so special.

In the evening, Bigg Boss asked all the housemates to fill a questionnaire consisting of various awards categories in the confession room and place it inside the envelope with their respective names. After carrying out this selection procedure, the housemates were asked to assemble in the activity area for the grand awards night.

The housemates seemed quite excited about it and were dressed in their best for the function.  After the buzzer rang, everybody rushed in the activity area which was turned into an awards arena.  Amidst much glam and glitter, the awards night kick started where Kamya Punjabi took over the stage to announce nominations followed by the winners. The first category of awards was Sabse Garam Sadasya and without any prizes for guessing who, it went straight to the angry young man of the house - Armaan Kohli.

Living up to everybody's expectations, Andy took away the award for Sabse Batuni Sadasya. He also received an award for being the Dogla Sadasya.

While Sangram got tagged with the Sabka Dost Award, Sofia got the well-deserved Rotlu Award. The pretty looking Gauahar got the Chidchida Sadasya Award and Ajaz got an award for being the Most Bevakoof Sadasya. Elli and Pratyusha looked happy receiving an award for Most Nikamma Sadasya while Armaan bagged the Gaddar Sadasya award adding yet another feather to his cap.