What happens when duplicates of actors are used for certain scenes? In most cases, shooting progresses as planned, while in some it throws the entire shooting schedule out of gear! 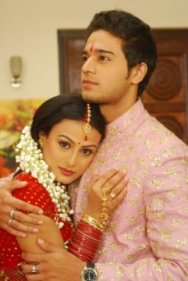 Featured Video
Something similar happened on the sets of Meri Doli Tere Angana recently. Since the lead actor, Gaurav Khanna aka Ruhaan, has other shows in his kitty, the unit of Meri Doli Tere Angana have had to contend with his duplicate for certain scenes. When lead actress Priyamvada, aka Simran, was unable to deliver during a certain 'intimate' sequence, the entire shooting schedule went haywire, resulting in the Producer Rahul Bhatt getting furious.


When asked Priyamvada, the actress said, "While doing intimate scenes, one definitely prefers the actual person there. We are so used to performing all sorts of emotional scenes with our co-stars, and there is a bonding through which we relate to the person. If it was jsut a casual scene, then it wouldn't have mattered. But here chemistry was required. And suddenly when an unknown person is sent and you are asked to do such an intimate scene, definitely it becomes difficult". It is heard the Priyamvada put her foot down and pleaded to the producer to get Gaurav to shoot this particular sequence with her.

Was this just a case of not being able to deliver due to a duplicate or is there more than meets the eye? What say Priyamvada..

physicsece 14 years ago I don’t believe this. She spent so much money with out looking the paper. This is not true, it’s false news. There must be something else; I don’t think Rani ji is so much stupid. She doesn’t have a secretary to read the paper.

+ 2
14 years ago haha what is up with these stars..
if you dont know how to buy property ..why buy it rani?
next time before buying land ..check the papers ..lol! feeling bad for you..

14 years ago I think she is right. It's impossible to give certain scene with duplicate. Way to go Simran

14 years ago hahaha what about those actors who have 'plastic surgery'
this is hilarious :p

+ 4
14 years ago I think she does have a point....one does have a comfort level with teh real person they shoot with day in and day out...thus doing intimate scenes with that person is more easy ....but with a complete stranger...its difficult indeed...as there is no comfort level ....or friendliness...at all...

+ 3
14 years ago well who knows.. but i think they shoudlnt use a duplivate in that case...

omg does it mean we get to see more of romantic scens .. soon
wow

+ 3
14 years ago Awww, actually that's quite sweet, I dont like it when shows use duplicates.. although sometimes it can't be helped, like in Gaurav's case. Thanks Ekta! :)