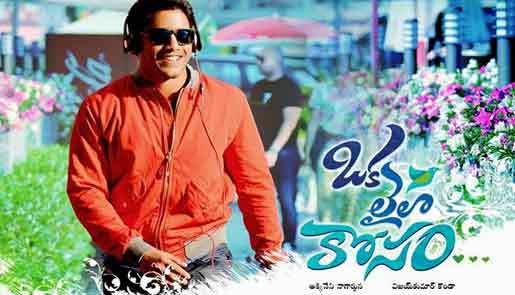 In the opening scene, we're introduced to Karthik (Naga Chaitanya), who, minutes before his MBA graduation ceremony, tears all the offer letters he has received from the best multinational companies. He goes on to deliver a speech about finding the true meaning of freedom, which according to him doesn't lie in fat paychecks and behind the desks of a large company.

He asks his father for a year-long break to travel the world to discover himself. Six months later, Karthik's father asks him if he has attained any clarity about his career. Karthik says he wants to write a book. A surprised father, not knowing how to react, says he has another six months to get things straight.

The initial few minutes of "Oka Laila Kosam" are like a whiff of fresh air. You feel it right from the first scene where the hero is introduced as an MBA graduate contrary to Telugu cinema's obsession with engineering. As a young viewer, you immediately connect with Karthik when he convinces his father to give him time to figure out what he wants to do with his career, because most of us would be cursing ourselves for ending up in jobs we hate to the core.

But all that changes when the heroine is introduced and Karthik falls for her instantly. The film pretty much follows the routine love template from then on, failing to deliver an enriching experience it had initially promised. There's constant stalking, making her uncomfortable.

Too much is messed up in the film and never do you feel efforts were taken to make it right. For instance, in the beginning, Karthik starts writing a book and it's fittingly titled "Oka Laila Kosam", but this episode is completely ignored by Vijay Kumar for most part of the film. Out of the blue, we see Karthik discussing about his book with a publisher. Never do we understand if Karthik really wants to be a writer or not, till the end.

There's another scene where Karthik's father decides to get him married because he feels it will make him responsible. We are forced to believe that a girl is willing to marry someone who has no clue about his own future, because she trusts in her father's decision, and thinks that he will choose the best for her. If getting married was so simple, most of us wouldn't have to slog so much to build a career.

The entertainment in "Oka Laila Kosam" comes in installments. While scenes featuring Ali evoke laughter, that can't be considered entertainment because most of it is force-fit for commercial reasons. Just like how Vijay influenced us to cheer with a series of comedy of errors for his first film "Gunde Jaari Gallanthayyindea; he plays the same card, expecting a similar response in "Oka Laila Kosam". But it backfires and proves why the need of the hour is innovation.

At a running time of 150 minutes, you really wish you had the power to stop the film whenever you want. Alas, that option is out of the question. Naga Chaitanya sparkles as a romantic hero, but he struggles in the emotional scenes. Pooja Hegde is talented and plays her part well but like many young heroines, she too faces the consequences of a poorly etched character.

"Oka Laila Kosam", which is partly refreshing, is messed up mostly as it suffers from cliched storytelling.