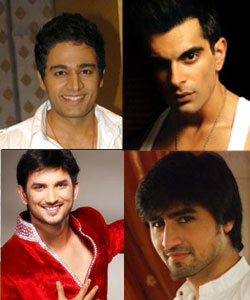 Pantaloons Femina Miss India has always been one of the gracing moments for the country where several  Bollywood actors set the stage on fire along with the 20 finalists.

But this year joining with Bollywood stars to burn the dance floor will be prominent faces from our own television industry.

Our source says "Sushant, Karan, Gaurav and Harshad will be performing this year for Femina Miss India and they will perform the numbers of the different Khans of Bollywood, choreographed by Shiamak Davar."

We contacted Gaurav Khanna who confirmed the news saying, "Yes I am performing for the finale, but I don't know any details about the whole thing because I just got a call from them."

Catch all the stunning performances of these television hunks on Pantaloons Femina Miss India 2011.

evelin97 9 years ago heyyy Karan wasnt there in the show :( that other guy replaced him

GauravsDbest 9 years ago love u so much!God bless u for all the lovely things u do:)miss u loads...

shara.ksgian 9 years ago love u ksg

CV's we all dmg lover really love u guys 4 giving us such a soulfull show ever like DMG but plzzz...bring it back again we r waiting 4 it 2 get a proper ending...

WE WILL BE WAITING 4 DMG

phoo_honey 9 years ago "Tree leaves do not look green forever,
Roses do not look fresh forever,
But I pray to ALLAH that
Smile on your lips stay forever!" &#9829;