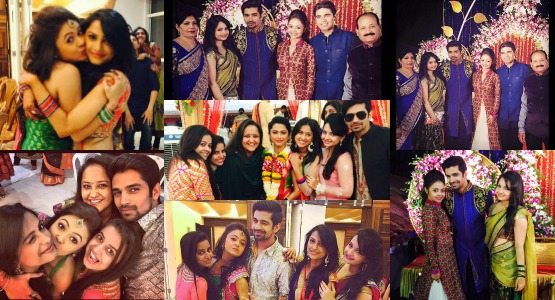 This is the season of weddings! We earlier saw the Dil Dostii Dance couple Sneha Kapoor and Lavin Gothi tying the knot. The next television celebrity who just got married is Rucha Hasabnis. She married to her long time beau Rahul on January 26. Well, what an icing on the cake was, the entire team of Saath Nibhana Saathiya came together to attend her wedding and shower all the good luck to bride and groom.

When got in touch with Vishal Singh (currently essaying the role Jigar in the show), he said, "It was an awesome wedding. Sangeet was on the 24th and her wedding was on the 26th. All of us reached the venue at 8:30 in the morning and attended all the rituals right from the Puja to the Haldi to the wedding and reception in the evening."

The entire Saathiya team had come together for this auspicious occasion. "All of us were just talking that we got a chance to come together and spend some good time. She had booked a bungalow for us. During the breaks in between the functions, we used to pull each other's leg, crack jokes around and stuff. It was mad fun. I would just like to Rucha and Rahul all the luck for her new beginning in life. No matter what, we will be friends for life."

When contacted, Giaa Manek told us, "Rucha and me got married in Saathiya on the same day as Gopi and Rashi. But that was reel so it was good to see her getting married in real life with the love of her life. I am glad I could attend every function and be there for her throughout. It was also the first time that I attended a Marathi wedding. So, it was too much fun. I even applied mehendi during her Sangeet. Besides that, it was a reunion with the Saathiya gang! That was a cherry on the cake."

Some of the other actors who attended her wedding were Devoleena Bhattacharjee, Swati Shah, Giaa Manek and Bhavini Purohit.

TellyBuzz wishes Rucha all the luck to Rucha!

6 years ago Love u Giaa manek . Ur the prettiest !! Muah Muah

Rabia66 6 years ago Love U both Giaa Manek and Rucha Hasabnis U made a highest place of Saathiya.. U both r Goshi Forever for Us...Giaa was Gopi Giaa is Still gopi And Always will be Gopi Forever U rocksss

6 years ago its really good to see entire sns gang together. All were looking awesome specially my giu. Wishing rucha a happy married life.

+ 5
6 years ago Nice to know what happened for the wedding, Sangeet 2 days before but haldi puja, wedding and reception all on the same day, cool date they chose because the husband will never forget the anniversary because its on republic day.

Nice to see the whole Saathiya team and I have to say Giaa Manek was looking really good better then Devo.

Sadafansari07 6 years ago wish you a happy married life Rucha .Giaa manek and you looking so preety in every function

this radha track is being more then 3 yrs know on that show...