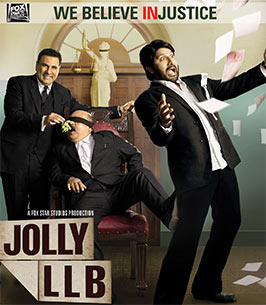 The fact that "JOLLY L.L.B." has won two National Film Awards has left its team - Fox Star Studios and director Subhash Kapoor upbeat about treating the audience to their next project "Guddu Rangeela".

"Jolly LLB" was Wednesday declared the best Hindi film, while actor Saurabh Shukla was named the best supporting actor for the same movie as the 61st National Film Awards were announced.

Happy and proud of the film's victory, Kapoor said: "To win a national award for this film ('JOLLY L.L.B.') is indeed very special and it's a huge responsibility as well, as we move on to bring our next, 'Guddu Rangeela'."

"Looking ahead, as we get set for our two releases in May, 'Hawaa Hawaai' and 'CityLights, all we can say is that we are pushing the envelope to create cinema that will tug at the hearts of the audiences and will push the boundaries of excellence."