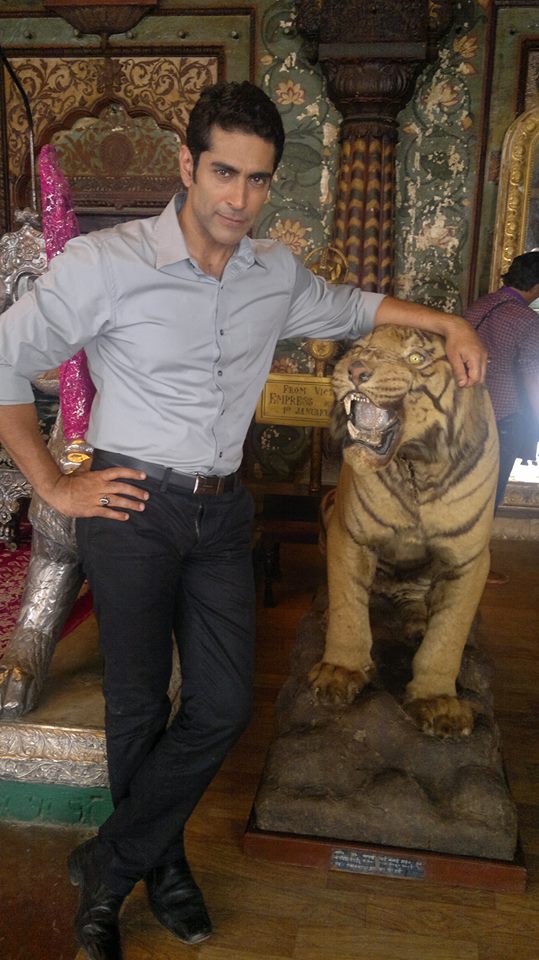 His character in Rangrasiya is on a break and Tarun Khanna is making the most of this by shooting for episodics since the talented handsome actor is very much in demand. Recently he was seen in Star Plus's volatile crime thriller Ishq Kills where he played a step father, and now he is busy shooting for Savdhaan India's Maha movie where once again he dons a negative avatar.

Telling us about the same, Tarun who is shooting in Rewa, Madhya Pradesh is mingling amidst royalty these days. Sitting with his Highness Maharajadhiraj Pushpraj Singh in his palace in the princely state of Rewa, Madhya Pradesh Tarun talks about his character, "I am playing a character who is not a prince but is royal blood and one of the royalties. The story titled Daayan is about how my character wants to avenge his father's loss of property from his relatives and at the same time he tries to siphon off some money too. And of course there is a mystery element involved..." trails off Tarun who has the company of actors like Mamik Singh, Ankur Nayyar and the pretty Neetha Shetty who plays the title role of Daayan.

So, Tarun is yet again playing a negative role and that too one that is related to royalty. Is it his looks or his demeanor that he has been bagging such kind of roles these days, "See, I am okay with whatever kind of work comes my way - whether positive or negative as long as it is substantial work and good money I am fine." His looks have made him a patent in playing royalty isn't it? "Yes, I guess because of my looks I bag such roles. Thus, I have done shows like Chandragupta Maurya, Shobha Somnath Ki, Ek Veer Stree ki Kahaani Jhansi Ki Rani, Veer Shivaji, Devon ke Dev. Mahadev, Rangrasiya and now this!" laughs Tarun who is obviously enjoying the treatment he is getting at the palace.

"I am here for more than a week and I am enjoying myself with the shoot and the company. I have met the Maharaj and he is not new to entertainment too. In fact his daughter Mohena Singh was one of the finalists of DID couple of years back and was also the choreographer on Jhalak Dikhla Jaa Season 6 last year. Overall, it is a nice experience shooting with these people," reveals Tarun who is enjoying himself to the hilt as he looks forward to spending some quality time with his wife Smriti Khanna and his newborn baby after this shoot.

Buzz is that Tarun has been offered a big role in a big budget film to be produced by a noted film production house. When asked about this Tarun doesn't deny but doesn't want to reveal anything either and says, "It's too early to talk about all this. At present after this shoot, I am looking forward to going to Delhi to spend time with my family who are eager to see my son. I have been shooting continuously since November last year and even when he was born I was shooting in Gujarat and had to rush back to Mumbai. So I am really looking forward to this one week break when I will just chill with my family."

+ 3
7 years ago I Hope This does not mean Tarun Khanna is not leaving Rangrasiya for good ... I miss Thakur-sa a lot ..

+ 4
7 years ago All the best with all your projects Tarun Khanna fantastic actor missing our Thakur Sa on Rangrasiya!!
Why isn't Rangrasiya tagged???

+ 4
7 years ago All the best with all your projects Tarun Khanna fantastic actor missing our hot Thakur Sa on Rangrasiya!!
Why isn't Rangrasiya tagged???

7 years ago good luck dude, u were awesome as thakursa and i'm missing him a lot :)

7 years ago Tarun Khanna congrats on landing the new role!! Miss you in Rangrasiya!!!

+ 4
7 years ago All the best with all your projects Tarun Khanna fantastic actor missing our hot Thakur Sa on Rangrasiya!
Why isn't Rangrasiya tagged???

7 years ago Tarun come back in RR and give us a break from this MU track!!!