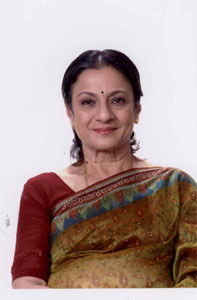 Veteran actress Tanuja will make a grand entry on television exclusively through 9X, soon to be launched mega entertainment Hindi Channel. Tanuja started her film career in the movie Chhabili directed by her mother, Shobhna Samarth which was followed by memorable performances in Baharein Phir Bhi Aayengi, Haathi Mere Saathi, Mere jeevan Saathi , Do Chor and Ek Baar Muskara Do where she proved her versatility.

She wil be seen on the small screen will be on the Comic thriller show titled Baban Bhai v/s Bimla Tai. Tanuja plays the character of Bimla Tai .Speaking of her foray on television the very Talented Tanuja said "TV is an exciting medium which goes straight into the homes and is able to communicate directly to the people. Its exciting to be on a comedy show because I like to do comedy and especially when there is so much sorrow in the world already its nice to make people laugh"