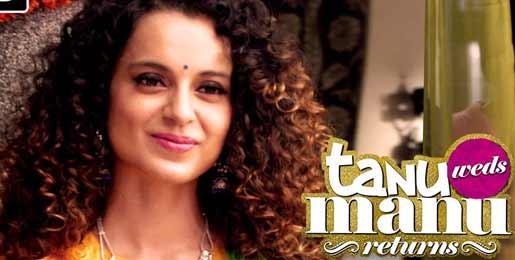 The film has grossed over Rs.129 crore in India and Rs.36 crore overseas since its release, making it the first film to cross Rs.100 crore Net Box Office (NBOC) this year, read a statement.

Focussing on the rediscovery of love between a married couple, the film features Kangana in a double role and has a supporting cast of actors Jimmy Sheirgill and Swara Bhaskar.

The film got massive response not only from the critics and audience, but also from the film fraternity. Released on May 22, the entertainer collected Rs.38.10 crore in its opening weekend.

Elated by the success, the director said: "Nothing can be bigger and more encouraging than this for a filmmaker. I'd like to thank everyone for accepting the film with so much warmth."

"'Tanu Weds Manu Returns' is not just our film anymore, it now belongs to the audiences. After a long time viewers are enjoying a real entertainer and we are witnessing families flocking to cinemas and also repeat viewings. The success of films like TWMR reiterates our audiences' appetite for content driven entertaining cinema," Ahuja said.

5 years ago was bored!

+ 3
5 years ago I loved this film! What an ENTERTAINER! Maddy and kangana were amazing.

Kangana has proved her worth and shown that she doesn't need the khans to give blockbusters. Hats off!

metronome 5 years ago Simply loved both Kanganas! Beginning to really admire her as an actor and a person. Never seen a double role performed with such finesse and attention to detail! Awesome!

A word for Madhavan too, who managed to hold his own in this movie. Kudos to the remaining cast too :-)

Glad this movie eclipsed all others, especially the overhyped Bombay Velvet types.

+ 4
5 years ago There are star heroines, gorgeous heroines, hot heroines and then there is an Actor par excellence called Kangana.

Hats off to Team TWMReturns!

+ 3
5 years ago I loved the movie. it was soo soo good. it deserves all the praise

+ 5
5 years ago i've already seen the movie 2 times in the theatres.. first time i took 3 members of my family.. the second time, I took my dad to watch it. I feel like EVERYONE needs to see this entertainer!! This is real cinema! Kangana Ranaut makes every other actress look like trash now... she has set the bar ...and has proven you don't need a skin show, or an item song to make a movie hit.. just a real performance. take a bow! Every single actor in this movie had a purpose, and delivered exceptionally well..especially Deepak who plays Papi..he is another star of the movie!

+ 2
5 years ago Kangana really is marvelous in the film
she is such a versatile actress !

5 years ago Awesome!! This is even more than Queen but that's because people see Kangana's worth!! Congrats to all in this film!! Now I need to go see this!!