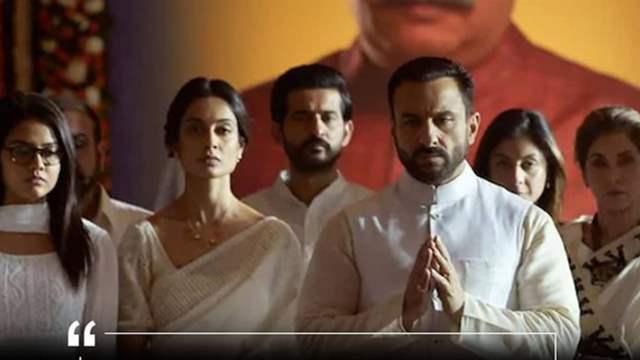 The newly released show Tandav has sparked a controversy all over social media. While many on the Internet are opposing the show for allegedly hurting Hindu sentiments, BJP MP Manoj Kotak wrote a letter to Broadcasting Minister Prakash Javadekar seeking a ban on the show for ridiculing Hindu deities.

Continuing the long row of controversy, the cast and crew of Tandav have now issued the official statement and announced that changes will be implemented to the web show to address the concern of the audience.

Director of the show Ali Abbas Zafar shared the statement on social media and wrote, "We have utmost respect for the sentiments of the people of our country. We did not intend to hurt or offend the sentiments of any individual, caste, community, race, religion or religious beliefs or insult or outrage any institution, political party or person, living or dead. The cast & crew of Tandav have made the decision to implement changes to the web series to address the concerns raised towards the same. We thank the Ministry of Information and Broadcasting for the guidance & support in the matter. We once again apologize if the series has unintentionally hurt anybody's sentiments."

This is not the first time the filmmaker has issued a statement on the same. Previously, he issued an unconditional apology after several people involved with the show, including himself, were named in an FIR.

In his apology, the filmmaker had written, "We have been closely monitoring viewer reactions to the web series Tandav and today during a discussion, the Ministry of Information and Broadcasting have informed us regarding a large number of grievances and petitions received on various facets of the web series with serious concerns and apprehensions regarding its content hurting the sentiments of the people."

He had also shared an update on the same and stated that the makers are in talks with the Ministry of Information & Broadcasting, and will soon come to a solution.

+ 4
1 months ago Yea they thought hindus are meek, unlike a certain peaceful community who beheads people making fun of their god....these people should be arrested and legal discourse should happen, ek ko seedha kiya toh sabki akal thikane aa jayegi.... And yea, next time if the director wants to make fun of somebody's dieties then he might as well start with his own religion first...

+ 3
1 months ago A very sad day in the world of art and filmmaking...creative liberties getting suppressed!!! Shame on the Indian public who have driven this to happen!