View Profile
COLORS' Bigg Boss 3 is making sure that the inmates of the house are as eclectic as they can be! 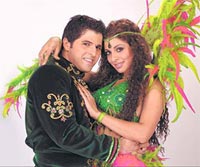 Telly Buzz now has a confirmation about Tanaaz and Bakhtiyar being part of Big Boss3. When we called Tanaaz' manager, this was what he had to say, "Yes they have gone into the Bigg Boss house and they can't speak now."

The couple recently had a kid. So with  both the parents gone, who is going to look after the child? On this the manager commented, "Yes, he is very small. But Bakhtiyar's mother will be taking good care of him."

Other names who are speculated to have made it into the Bigg Boss house are Farah Naaz, Vindoo Dara Singh, Poonam Dhillon, Kamaal Khan, Sherlyn Chopra, Loveleen Mishra, Shamita Shetty.

It remains to be seen if being away from their kid makes the Bakhtiyar couple more vulnerable emotionally in the house of Bigg Boss!

SecretKhabri420 11 years ago This sounds like cheating, they suppose to be far away from family members, then why are them both in the house?, the list of the participnts sounds too boring too, most of them r old...........

LimitLessFan 11 years ago I like this pair, but both ending up in same season isnt gud

Autumnn 11 years ago Strange!!! They went inside the house when their baby is so small.. that too both of them.. strange...

I feel it is unfair that both of them are inside the BB house at the same time cos they have an advantage of one person not nominating them... which is so unfair to the other contestants...

but the other contestants dont seem that good!

shine_bright 11 years ago thats messed up..just for publicity and money they just leave their child like tht........anyways waht channel is this gonna be on?

lil_desi_goddes 12 years ago i agree with Aki Narula's last statement, that really Kareena has the attitude in her, and she looks absolutely divine in all the costumes she wears... and i love all the clothes designed by Aki throughout the film!

~*puja*~ 12 years ago thanks... i like Minissha's costumes the best, they're soo different and young!!! Can't wait for the film!!!