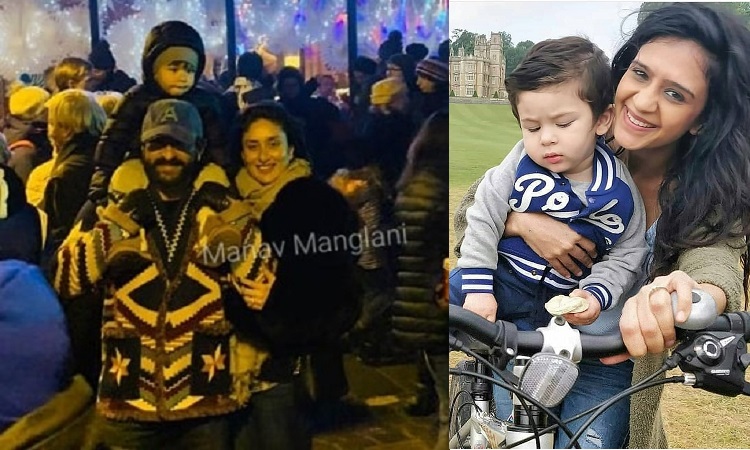 Saif Ali Khan and Kareena Kapoor Khan celebrated Taimur's 2nd Birthday in Capetown, South Africa and we got you all the insights from the birthday bash. Later the family celebrated Christmas in Mumbai.
Post-Christmas celebrations, the family headed to London to spend their New Year's Eve. And we got you all the adorable pictures of Taimur from their Christmas holidays.
By seeing all pictures one thing we have pointed out is that Taimur seems to be missing his paparazzi friends.

In their latest photo, Saif and Kareena are seen in heavy winter clothes as they pose for a happy picture.
Check out the picture:

Speaking about spending with Tim, Saif had earlier said, "I have been leaving my house early and I have started waking him up at around 7. He finishes his feedhe has just started on solid foodsand we spend about 20 minutes together. I read to him or put on some music, or nursery rhymes. Taimur incidentally begins his day by listening to devotional songs. It's his nanny's idea. And if I return by 8 P.M. and he is awake, we spend another 20 minutes together. He begins his day with bhajans and ends his day by listening to Chopin and Tchaikovsky. Other than that he just, burps and farts all day, just like me."
Meanwhile, on the work front, Saif was last seen in Baazaar opposite Radhika Apte and Chitrangada Singh. He will be seen in Go Goa Gone 2 and Ajay Devgn's Taanaji: The Unsung Warrior.
Kareena, on the other hand, will be seen in Good News alongside Akshay Kumar. The film has already gone on the floor and also stars Kiara Advani and Diljit Dosanjh.
She has also been signed up for Karan Johar's period drama Takht, releasing in 2020. The cast of the film includes Ranveer Singh, Alia Bhatt, Vicky Kaushal, Bhumi Pednekar, Janhvi Kapoor and Anil Kapoor.
Stay tuned for more updates.
(Credits: Times Now)
0 Likes

Amitabh Bachchan Blasts Troll Who Asked Why He Doesn’t ...
21 minutes ago

Janhvi Kapoor calls the journey of discovering 'Gunjan ...
40 minutes ago