Technically Anurag Kashyap's animation film 'Return of Hanuman' marked the yearend. But according to trade pundits, in the multi-starrer feature films category 'Taare Zameen Par' and 'Welcome' raked in the moolah.

In 2002, 'Kaante' and 'Chalo Ishq Ladaayen' were the last releases of the year. Both turned turtle. In 2003, Rajkumar Hirani's blockbuster 'Munnabhai MBBS' - the second last release of the year - sparked hope, but the year closed with 'LOC: Kargil' that proved to be a dud. The end of 2004 saw biggies 'Swades', 'Ab Tumhare Hawale Watan Sathiyon' and 'Dil Maange More' sinking without a trace, while the 2005 yearend disappointments were 'Vaah! Life Ho Toh Aisi' and 'Anjaane - The Unknown' and in 2006 'Bhagam Bhag' and 'I See You' met with an equally sad fate.

'Taare...' narrates the story of a dyslexic child and has grossed about Rs.20 million. 'Welcome' treats the audiences to a wacky comedy that loosely borrows from Hollywood caper 'Mickey Blue Eyes' and has crossed the Rs.43-million mark two weeks after its release.

Film critics believe that if the content is good, the film does well, unaffected by the quarter of the year it is released in.

'I think the jinx factor is in our minds. It is an excuse. Why these films did well was because of their quality content. 'Welcome' is a perfect entertainer while 'Taare...' is an emotional one,' trade analyst Taran Ad
Featured Video 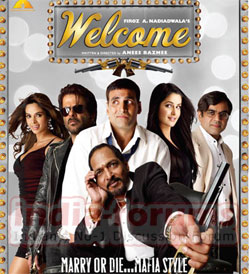 'Good content always wins. Consumers want good content, if you give them that it does not matter whether the film releases at yearend or not,' added Gautam Dutt, CEO of cine media PVR Ltd.

Movie buff Ashutosh Singh agreed, saying: 'To me, it doesn't makes a difference whether a movie is released in the starting, mid or end of the year. As a movie buff, if the film is good I would watch it unfazed by the time of its release.'

Putting light on another facet, film critic Harish Chandra Yadav said that apart from content, marketing strategy plays a very important role in the success of a film.

'Marketing strategy and film promotion contributes largely to the success of a film. For instance, like 'Taare...', Kaushik Roy's 'Apna Aasman' was also based on a similar subject. Since he is a newcomer and because of lack of promotion, the movie went unnoticed,' explained Yadav.