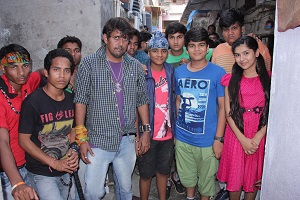 Neela Telefilms' popular show Taarak Mehta Ka Ooltah Chashmah on SAB TV has always been known for doing something different along with bringing forth rib tickling episodes for its viewers. This time, the team of the Taarak Mehta shot for their upcoming track in a slum.

As per our reliable source, "Tapu sena takes some money from their parents and they visit a chawl (slum) for a good cause but problems start arising as the bhai of the chawl comes to challenges Tapu Sena. Somehow bhai's intentions are not good and thus he wants to hurt these children. But later the other members of Gokuldham Society also reach the slum. To make it look real, the entire sequence has been shot at a real slum area in Kandivali Mumbai."

When contacted Bhavya Gandhi aka Tapu, he said, "It was a superb experience shooting at the chawl. Those people don't have enough money but still they have a small TV at their home and they watch the show Taarak Mehta regularly. I felt so good to see that."

Will Tapu Sena be able to defeat the bad guys of the chawl? Will the parents be able to help out their kids in getting out of this trouble? The upcoming episode of Taarak Mehta Ka Ooltah Chashmah will unfold the answers to these questions.

dey.bh 6 years ago common makers! you are suppose to surprise us if not entertain. why create useless suspense when its an open secret?

-Lakk- 6 years ago Very Good!..Keep it up TMKOC Team.
SO Finally the track is disclosed..
Good it that Tapu Sena is Doing,,
Waiting...

exclusive
Exclusive Sara Khan to release her next song 'Bham Bhole'; says it's a ...
32 minutes ago