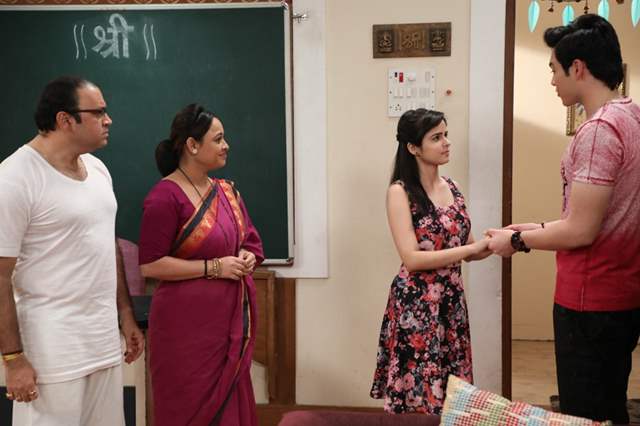 The upcoming episode of Neela Film Productions Private Limited’s Taarak Mehta Ka Ooltah Chashmah (TMKOC) will see an interesting development which will have viewers hooked over the Valentine weekend.

One fine morning Tapu sena drop into Bhide’s house unannounced for his permission to use the Club House for a surprise function in the evening. Bhide is a bit irritated with being disturbed in the midst of his yoga routine. However, more than Bhide, Sonu is upset that Tapu sena isolated her and planned a function without her knowledge. So Tapu explains to her that they didn’t inform her because the function would have a surprise for her.

Also Tapu seems quite nervous about how Sonu would react but the rest of them nudge him on saying Sonu won’t say no to him. Not knowing what to make out of it, Bhide is left wondering what the function is about and how Sonu features in it.

Will Tapu propose to Sonu on Valentine’s Day and that too in front of all the Society members? Was Bhide right all the way in suspecting that Sonu and Tapu are going to hook up someday?

Tell us your views in the comments below.

Taarak Mehta Ka Ooltah Chashmah: THIS is how the team plans to ...

Revealed: Details about Sunil Grover and Shilpa Shinde's ...
4 hours ago