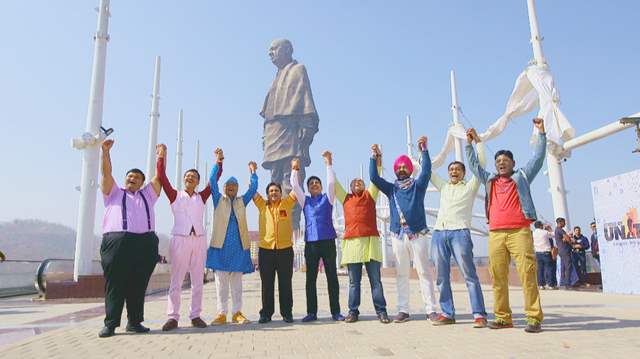 On the occasion of Rashtriya Ekta Diwas or National Unity Day, Neela Tele Films Private Limited’s Taarak Mehta Ka Ooltha Chashmah commemorated Sardar Vallabhbhai Patel’s birth anniversary and dedicated a song to celebrating his contribution to the Nation. National Unity Day was introduced by the Government of India in 2014 to re-affirm the inherent strength and resilience of our Nation to withstand the actual and potential threats to the unity, integrity and security of our country.

“The Statue of Unity is a great tribute to our Iron Man of India - Sardar Patel and we are commemorating his birthday on the occasion of Rashtriya Ekta Diwas, today. We have also dedicated a song to mark the occasion and I am sure our viewers will enjoy listening to it,” says Mandar Chandwadkar who plays the role of Bhide in the show.

“We had shot the video earlier this year to show to our audiences the majestic statue of the great Sardar Vallabhbhai Patel. While the monument pays homage to the man who united the Nation, today’s day gives us all an opportunity to remember his invaluable contribution to providing a strong foundation for an independent India,” says Tanmay Vekaria who plays the role of Bagha.

“We were the first TV show that had shot at The Statue of Unity and this is a matter of great pride for us. We also have a complete song shot there which is dedicated to Sardar Patel. I wish to thank the entire family of TMKOC and, especially Asit Modi for conceiving the episode dedicated to the Iron Man of India,” says Shyam Pathak who plays the role of Popatlal.

Are you a Taarak Mehta ka Ooltah Chashmah fan? Let us know in the comments below...