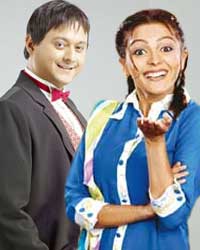 As per our source, "Shahabuddin Rathod is a famous orator whose fictional character, Vanay Chand is a house-hold name. SAB TV and Optimystix will be coming up with a family comedy drama, titled 'Paapad Pol Shahabuddin Rathod ki Rangeen Duniya'".

According to our source, "The story is based in the so-called slum area of Ahmedabad which is called 'Pol'. The show has gone on floors, and will launch either in the 2nd or 3rd week of June. Paapad Pol will occupy a prime time slot on SAB TV".

Swapnil Joshi remained unavailable for comment. We have heard that Swapnil will be seen in a completely new look.

Ami Trivedi told us, "Yes, I am doing a show along with Swapnil Joshi. I can't divulge more details".

Producer Vipul Shah confirmed the news and said, "Yes, we are coming up with a family comedy which will be an adaptation of the literary works of Shahabuddin Rathod, for SAB TV. The 70's character will be presented in today's avatar. The show is expected to launch in the second or third week of June. It has Swapnil and Ami Trivedi as leads".

shashank.sriva 9 years ago Thank god Ami Ji did this serial!! I only watch this serial coz of her. Her presence just makes the environment electric. Thanks for taking her as Tulika!

*Devanshi* 10 years ago Shahbuddhin's piece of work.. LMAOOOO.. It's going to be funnn

Hulia 11 years ago Aftab Shivdasani soo sweeet ..I love him

crazy4bollywood 11 years ago Awwwww! Seriously he is sooooo sweet! Probably the nicest person I''ve ever met! I just love him! :)