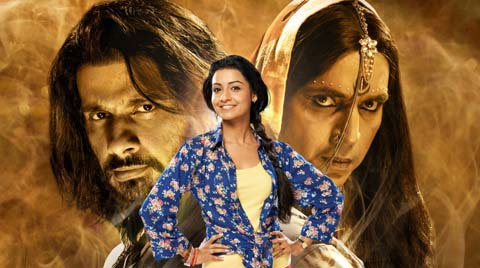 Ek Boond Ishq a popular show on Life OK is heading towards its climax where it will be revealed about Kalavati's true identity and her intentions. Yes it will be out that Kalavati (Vishwajeet Pradhan) and Pratap are the same person.

As seen in the current track Mrityunjay (Viraf Phiroz Patel) has donned another character to trap Pratap (Vishwajeet Pradhan) and make him reveal his own truth. Thus in the upcoming episodes Mrityunjay and Tara (Chhavi Pandey) will succeed in there plan as Rudra Pratap will reveal his identity of being Kalavati as well in front of Jairaj Thakur.

Our sources inform us, "Mrityunjay and Pratap will meet to sign a contract where he will insist to meet Kalavati. Pratap will argue that she won't come but Mrityunjay will force him and thus Pratap will get frustrated and speak the truth the he is Kalavati. Mrityunjay will act as if he doesn't believe him. To prove this that he is only Kalavati he will go in his pink room and will come in a shocking avatar, he will be half dressed as Kalavati and other half as Pratap.

"Now the point is how will Jairaj (Rakesh Kukreti) come to know about this. Mrityunjay will fix a spy cam on his button and Jairaj along with other family members will watch everything live. Here Jairaj will also come to know about the pink room where Pratap used to do his makeover. Thus he will be handed over to police. As story will evolve, Pratap will escape from prison and will start killing family member," adds the source.

With Kalavati revealing her true identity, the show will take a two years leap with lot of twists and turns in store for the audience. Pratap who is on a killing spree will kill all the family members and will not even spare Meethi who is expecting. Only Tara and Mrityunjay will be able to escape with Meethi's (Nidhi Uttam) daughter as she will give birth to a baby girl but will be killed by Pratap along with the other members. The entire story line will change and the new cast will be roped in the show. From the current cast the viewers will be able to see Mrityunjay, Tara, Nandini (Hunar Hali), Thakur Rudra Pratap and rest of the characters will die in the show. The new characters  who will be seen in the show after the leap are Ankur Nayyar and Priya Bhatija.

Ankur Nayyar was last seen in Sony TV's popular show Bharat Ka Veer Putra - Maharana Pratap and he will enter Ek Boond Ishq. We got in contact with Ankur he says, "Me and Priya Bhatija are entering the show and we will enter as brother and sister.  We have no connection with the current family. I am looking forward for this venture, we haven't started shooting yet but I have shot for the promos, it was an amazing experience, the whole team is supportive. I will come to know more about others when I will be a part of this show. This time I am doing something unique so I hope audience like my performance"

The channel successfully rose to 3rd position with the increasing TRPs of its shows. When we asked Ankur about this he says, "Life OK is coming up with many interesting shows and concepts and I think that could be the reason for the channel reaching its new heights."

Well its quite an interesting track. Surely the audience will be hooked to the show to know the gripping track. To talk about the celebration, it was indeed a joyous moment for the show's team as the show has completed the journey of 200 episodes along with the lead Viraf's birthday celebration too.

Further talking about the show's achievement he says, "I would give the credit to the creative team, writer Saba who frames the story so well. It's a tricky show, we have kept the audience hooked to the show by bringing various twists and turns in the story line. Saba always tries to bring creativity in the story line. I hope we keep entertaining audience."

We wish the entire team of Ek Bond Ishq a hearty congratulations and belated Happy birthday to Viraf Phiroz Patel!

Vartika07 5 years ago This idea of leap was fully faltoo just to spoil the show. The should have stretch the leader track and Babloo track a bit.

atominis 6 years ago Ankur Nayyar is fabulous as Guru Raghvendra in Maharana Pratap!

Will miss the old starcast of EBI a lot...

_Teena_ 6 years ago Eagerly waiting for the Naya Rang in Ek Boond Ishq!