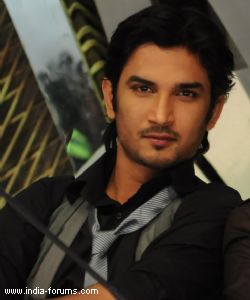 Sushant Singh Rajput who plays the simple Manav in Zee TV's Pavitra Rishta has of late been in the limelight for all the wrong reasons!! The actor, we hear has been pretty confident about him and his girl friend Ankita Lokhande reaching the Finale of Sony's ongoing reality show, Jhalak Dikhhla Jaa. But the point to ponder over is that, he has apparently been talking about this from the time he signed to be part of the Sony show..

We also hear that Sushant revealed yet another fact related to the show in public recently.

Our source informs us, "Sushant was recently rehearsing for his performance with Ankita for the Valentine's Event of Star One and Balaji Telefilms, Ajab Prem Ki Kahaani, when he openly confided in certain actors and crew members present there, that Ankita was brought back in Jhalak Dikhhla Jaa after he threatened the channel and production house to walk out of the show if she is not got back".

Another incident that recently put the actor in bad light was his fight with a canteen guy in the studio where he was rehearsing for Jhalak Dikhhla Jaa. And not to forget the incident when Sushant and Ankita simply did not budge out of their private celebration when the channel wanted them to shoot for a very important promo shoot for Republic Day..

We contacted Sushant to get his side of the story, and he told us, "Please fire your source and tell him/her to become a writer in a fictional show. The show might be a No.1 in no time".

Sushant, have you not heard that 'reality' is stranger than fiction? As for us, we stand by our sources..

PRFANNTHTIME 8 years ago everyone will have their bad part right???.. Mediamen are not jesus christ. Do you know one thing about Superstar Rajinikanth?? In his early 30s he married Lata at that time He told to press people like this "You should not come to my marriage"
ONe reporter asked"if we come what u wil do".
He shot back saying "I will do nothing i will shoot you for real". Now look at him how matured he is. There is no point in yelling.

Shahrukhlover 9 years ago Kya jawab diya Sushant! Very good! The media should really but out of actors' personal lives.

nikitagmc 9 years ago It is a wonder that TB which is usually the first one to report anything that happens on the JDJ set and Ranjini Nair who claims to have so good sources. did not write a single article on the incident that took place recently on the sets of JDJ... wherein Sushant proposed Ankita and she said yes.

Come on TB, this is seriously not fair.

Ethereal-Path 9 years ago well i think he's such a swtheart to me that these rumours, evn if true dnt matter!! Sushant n ankita rock!!

Icy_n_Chilly 9 years ago Its always the same prob with d ppl who reach on top!!!
Sushant no doubt perform beautifully... but all these rumours are lyk sh**

Previously it was KSG who ws bashed n put to wrong lite jst coz ppl love him... n now its Sushants turn as he is also loved!!!

gilly12 9 years ago it does not matter if sushant is right or wrong. main point is this a match-fixed like show, where everything is pre-planned. no genuine contest. to get rest for injury saliyana go out. daya does not dance so that he can be eliminated, so does shekhar. everything according to a plan. ankita will be 200% in the final. that is why she is brought back although krushna was far better. this time they do not involve public. why? only to give a chance to ankita as a 2nd wild card, it is unprecedented. why public will have no say in wild card entry? then make it a judge-based programme. other dancing shows are much fairer in other channels. chang dances better, ankita gets better marks. she gets high undue marks to make up for low voting. there is a moving finger behind all these plans. remember prachi? we have stopped watching such a rigged and sick show. many others are following. trp is dipping.

Swati_ 9 years ago OMG !!! Reporter should write something sensible.. How can a tv actor threaten production house? They r bound by contracts... He is not a fool to leave 50 lakhs.. Btw he has not even confessed publicly about being in a relationship wid Ankita.. Reportes r assuming the things they want.. He cannot do these kinda things for her.. Sush baby ur fans trust nd love u.. Keep rocking..

sach bola usne ... give this source a fiction option to write