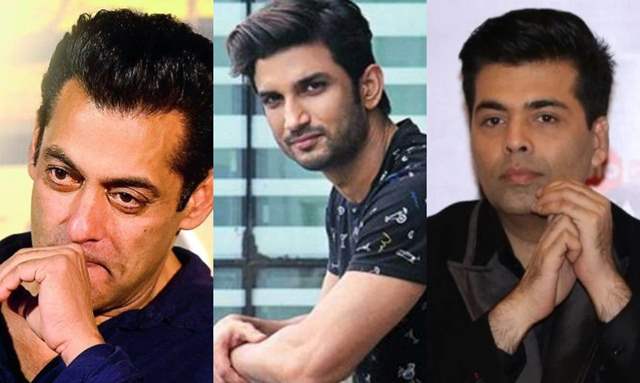 Bollywood actor Sushant Singh Rajput was found hanging in his Bandra residence in Mumbai. The actor was battling depression for the last six months and took the drastic step of ending his life on Sunday, June 14.

Sushant’s untimely demise has sparked a rigorous debate around nepotism in Bollywood and several names like Karan Johar, Salman Khan among others came to the surface.

As reported by ANI, a police case has been filed in a court in Bihar’s Muzaffarpur, against Bollywood directors Karan Johar, Sanjay Leela Bhansali, Ekta Kapoor, Salman Khan and others in connection with Sushant Singh Rajput’s suicide.

"I have filed a case against 8 people including Karan Johar, Sanjay Leela Bhansali, Salman Khan & Ekta Kapoor under Sections 306, 109, 504 & 506 of IPC in connection with actor Sushant Singh Rajput's suicide case in a court in Muzaffarpur, Bihar," Advocate Sudhir Kumar Ojha was quoted as saying.

"In the complaint, I have alleged that Sushant Singh Rajput was removed from around seven films and some of his films were not released. Such a situation was created which forced him to take the extreme step," he added.

Politician Sanjay Nirupam had come forward and made a shocking revelation following Sushant’s death. Nirupam alleges that Sushant lost seven films in just six months despite delivering a hit movie like ‘Chhichhore.’ He also mentioned that the industry's ruthlessness works on a very different level and claimed that the industry’s cruelty killed Sushant.

In a tweet written in Hindi, Sanjay Nirupam said, "After the success of ‘Chhichhore’, Sushant Singh Rajput had signed seven films. He lost the films in just six months. Why? The film industry's ruthlessness works on a very different level. And that ruthlessness took the life of one talented person."

Sanjay Nirupam’s tweet resonates with filmmaker Shekhar Kapur’s comment after Sushant’s death on Sunday.  Shekhar had posted a cryptic tweet after the young actor committed suicide as he wrote on Twitter: “I knew the pain you were going through. I knew the story of the people that let you down so bad that you would weep on my shoulder. I wish Iwas around the last 6 months. I wish you had reached out to me. What happened to you was their Karma. Not yours. #SushantSinghRajput”

Shekhar Kapur had cast Sushant Singh Rajput in his film titled Paani, but the film got delayed.

Sushant’s untimely demise has started a conversation around mental health on social media platforms and many people have also called out the hypocrisy of Bollywood biggies offering condolences to the late actor but allegedly neglecting and boycotting him in his tough times.

Celebrities including Kangana Ranaut, Nikhil Dwivedi, Rajat Barmecha slammed B Town actors for outpouring love for Sushant after his demise, but not supporting him during his low phase.

People have been blaming ‘nepotism’ for Sushant’s tragic step of suicide and also slammed Karan Johar and Alia Bhatt for mocking Sushant on the former’s chat show.

In other news, filmmaker Anurag Kashyap’s brother and director of ‘Dabangg’, Abhinav Kashyap talked about how he dropped out of Dabangg 2 after directing Dabangg after Arbaaz Khan and Sohail Khan bullied him and sabotaged his career.

What are your views on the same? Discuss in the comments below...

Juhi_04 1 months ago @Funny29: Its like saying same why a murderer is arrested after he killed someone instead of before that? For your question, if justice is done many more people like Sushants in the past will get justice and many more Sushants can be avoided in future. No one knew what injustice was happening with Sushant as we were getting good movies of him every year. If people had known then they would have done this before and Sushant would be alive today.

Ms.S.K. 1 months ago Hope Aditya Chopra (YRF's) is in the list of 8. The Main culprit. Cannot understand why Sanjay Leela Bhansali listed?

Funny29 1 months ago strange he is dead and now some people want justice for him. Why now he's dead why not much earlier when he was alive

ChickenSoup 1 months ago None of this is gonna bring the guy back. He should have stayed and fought against them himself.

ehaab 1 months ago I want justice for sushant

ronshaan 1 months ago Many people fail in life, many should have ended their life, no one speaks about injustice happen to those who don't give up, now this case against those people is not going to give anything.

The Bhatts were involved throughout: Ankit Tiwari on his ...
16 seconds ago