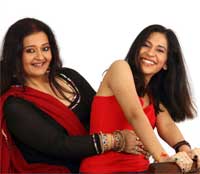 When it comes to moms we go all out and please them!! On the occasion of Mother's Day, star cast of Sajan Re Jhoot Mat Bolo decide to help out Khushali Jariwala, Apara' Mehta's daughter in doing something special for her mother  on the set.

A day prior to the D day, Khushali Jariwala met the star cast Sumit Raghavan, Sukesh Anand and Manoj Goel who plays Apara's sons to plan the surprise.  All excited, Apara's co-stars suggested that Khushali should give her mother a surprise on the sets.

It was just another regular shoot day on the set on Mother's Day, but after a while in between takes Apara noticed a familiar face waving at her from the other side of the room. A while later, she was ecstatic to see her daughter Khushali on the set to wish her "Happy Mother's Day". Khushali also got with her Apara's favorite bouquet of flowers. And yet another surprise awaited Apara as her co-stars and reel life sons Sumit, Sukesh and Manoj arranged a yummy cake for her which she happily relished with her whole family.

"Am so touched by this gesture, I never expected that my daughter Khushali will come for the shoot and actually see me play a reel life mother. I feel so special. I thank my co-stars and the team for making this big surprise possible on the set on the occasion of Mother's Day", says Apara Mehta aka Damini Devi Diwan.

Now, readers lets gear up to do something special for our mothers too!!
9 Likes

"Would Have Dragged Anurag To Court Had He Said Such ...
4 minutes ago