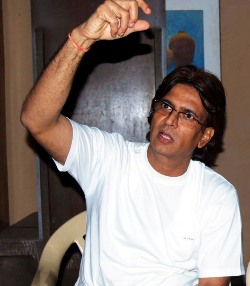 Three years back Arun Govil and Sunil Lahiri joined hands and came with a production house named Art Viewers. And their first show titled Happy Home was launched on Doordarshan.

The latest we hear is that Sunil Lahiri is coming up with the remake of Happy Home on SAB TV.

A source informs, "Sunil Lahiri is coming up with the remake of Happy Home for which he has started approaching actors. Sustaining its earlier concept, the show will have a new look with a few new cast."

The original Happy Home was set in an old-age home where all senior citizens come together as a happy family as their children abandon them.

We contacted Aruna Singhal and she said, "I did Happy Home which was on DD, but I have not received any call from the production house for its remake. But if I get a call, I am ready to work with them again."

We contacted Sunil Lahiri and he says, " Talks are on with the channel but nothing has been confirmed as of now."

Watch this space for more details…

+ 6
9 years ago Sunilji will always have a special place in our hearts. He was one of those actors who truly gave his 200% to his role, he lived and breathed Lakshman, and I can honestly say I picture Lakshman like him only. *blushes* He was one of the best actors of Ramayan, if not THE best.

+ 6
9 years ago You were an amazing Lakshman in Ramayan, Sunilji! No one to this day has played Lakhanji's role as well as you! All the best in your future endeavours!

hu*ju*fan 11 years ago i like seeing kareena with shahid, but with akki its kat who looks better

+ 5
11 years ago I Like Both Jodi, Kat-Akshay and Kar-Akshay ..
they both have Good Chemistry !