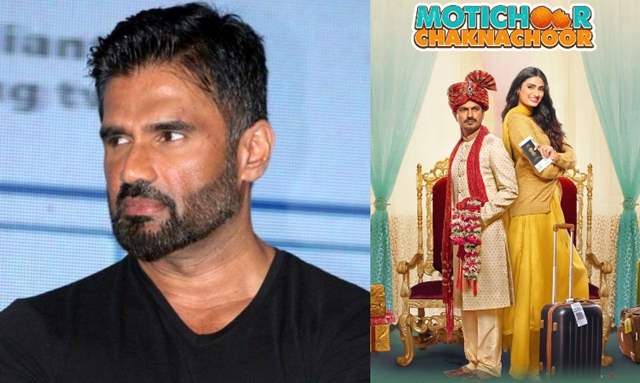 Bollywood actor Suniel Shetty was roped into trouble as he was accused of interfering with daughter Athiya Shetty’s upcoming film Motichoor Chaknachoor (2019). Shetty was slammed with a public notice on March 13, last year.

After being silent for almost a year the Hera Pheri actor has now denied all the allegations as he said, that the producers Rajesh and Kiran Bhatia said what they wanted to but they never gave any explanation back then as it was somebody else’s film and did not want to get involved.

The actor broke his silence over the controversy during an interaction with Hindustan Times.

I can very strongly say that I never interfere in Athiya’s films and that was all a lie. The producers (Rajesh and Kiran Bhatia) said what they wanted to but I never gave any explanation (at that time) because it was somebody else’s film. I had no involvement in it (at all).

The film’s producers legal notice to Shetty which read, “Mr Suniel Shetty has no right, title and or interest in the said film and has no capacity or any authority to either directly or indirectly discuss or take any decisions, negotiate, strategies or overlook the edit or in any manner interfere or be involved with the film Motichoor Chaknachoor or with its cast, crews, technical teams or coordinate with the studio involved with the film or its creative and marketing teams or post-productions or any person connected or with the trade. If done so, it shall be considered as trespassing and breach of confidentiality at its own risk, cost, and consequences.”

The actor has made a debut with Balwaan in 1992 and grabbing an experience of the film industry for over 2 decades he has worked with several producers and directors. The actor knows where to draw the line and mentioned that the producers were lying.

“Between the producer and me, we both know who is lying and who isn’t. My conscience is 100% clear that I was definitely not wrong at all. Motichoor Chakhnachoor gave Athiya an opportunity to perform and she was appreciated as an actor. What more would a father want?” he added.

Athiya’s Motichoor Chaknachoor is a romantic comedy which also stars Nawazuddin Siddiqui. The film was directed by debutant filmmaker Deba Mitra Hasan and produced by Rajesh and Kiran Bhatia.

Helly Shah on The Viral 'Suitcase Scene' From 'Ishq Mein ...
59 minutes ago

Saying Goodbye To 'Keeping Up With the Kardarshians' - ...
5 hours ago

Here Are The Indian Shows That Made it To International Emmy ...
6 hours ago

Abhishek Bachchan Conducted an Ask Me Anything Session; ...
6 hours ago

'Ishq Mein Marjawan 2' Actor Muohit Joshi To Debut as a ...
7 hours ago

Fukrey 3 Team Kick-starts their Work ahead of Shooting; ...
7 hours ago