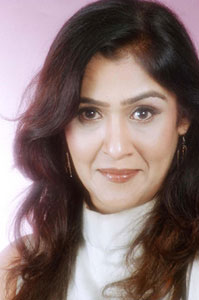 She was the malicious Sandhya of the English serial ‘Bombay Talking’ on Zee Café. The sister of singer Suchitra Krishnamurthy, Sujata Krishnamurthy who played her role with aplomb is multi-faceted and is now back on television, thanks to Bobbiy Bhonsle's Talent Management Company thro' which she has now bagged a role in Jiya Jale on 9X where she will play a lawyer.


Telly Buzz caught up with her to know more. Elaborating on the role she will be playing in Jiya Jale, Sujata says, “It’s a cameo role and I will be there in the show for about 15 episodes or so. I had always wanted to play a lawyer and I am glad that through Jiya Jale I got the opportunity to essay the role.”

Sujata was suffering from breast cancer and has recently recovered from it. When we inquired about her health, Sujata replied, “I am hale and hearty now. I have recovered and have signed a full-fledged role for a television soap. So you will definitely see more of me on screen now.”

Piya Valecha talks about acting, the digital divide and television and ...

wackysharu 12 years ago she is really cute... missed her when she was replaced in left right left( 1st season) she played naina's mom's role perfectly....loved her in hotel kinsgton too... get well soon...

kashish_shahid 12 years ago she is cute i love her acting her smile is so sweet... well all the best to her....

sparkling_gems 12 years ago Who is she?? can anyone elaborate more about her.