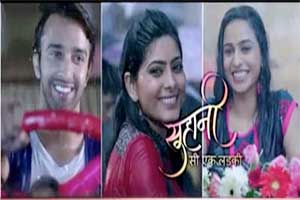 Suhani Si Ek Ladki is all set to rule the audiences heart as it goes on air from today on Star Plus. Since the show has not yet come on air and the story line has also not been revealed much, we at TellyBuzz unveil the gist of the show to the viewers.


Our source gives us a brief of the storyline and how the show Suhani Si Ek Ladki will pace up. Our source avers, "Initially the show will see a love triangle between Suhani (Rajshri Rani Pandey), Soumya (Neha Yadav) and Yuvraj (Sahil Mehta).  Soumya is Suhani's best friend who is also quite fair and rich. Yuvraj has always been interested in girls who are rich, fair and beautiful. Suhani on the other hand is shown a middle class, simple girl. As the story moves further and grips the pace, Suhani and Yuvraj will fall for each other. The entire story is based in Allahabad."

"Some of the stars that will be seen in the show are Chandresh Singh as Suhani's father, Lata Saxena as Suhani's mother, Divjot Sabarwal as Suhani's elder sister, Sanyogeeta Bhave as Yuvraj's dadi, Vijay Tilani as Yuvraj's elder brother and Rajoshi Vidhyarthi as mother of Yuvraj" ends our source.

Well, how much will the viewers like this show and how much it will be critically acclaimed is a wait and watch game.

Till then keep reading this space to get more updates on your favorite shows.

yusu1993 6 years ago Rajshri Rani Pandey and Sahil Mehta as in suhani and yuvraj (yuvani) i am looking forward for the show. pretty excited

DazzilerDizzy 6 years ago Eagerly waiting for this show! Sounds good :)