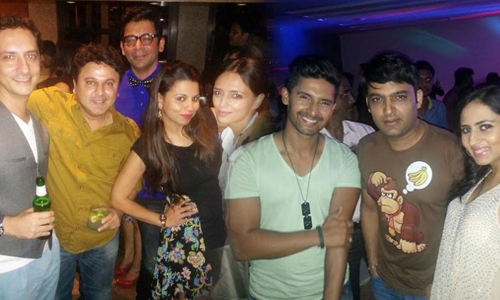 As earlier reported K9 Productions' most acclaimed and extremely popular comedy show Comedy Nights with Kapil has successfully completed its 100 episodes, the team celebrated their success where many known faces of television made their presence felt in the bash.

The whole team of Comedy Night with Kapil was present along with other TV celebs namely the hit jodi of Television Ravi Dubey and Sargun Mehta, heartthrob Karan Wahi, Rashmi Desai and many others.

So on this delightful occasion, we got in touch with the actors who attended this joyful occasion.

Sargun Mehta who is seen as Ganga in Balika Vadhu says, "Kapil is a dear friend, he has been throughout with us. We know him since a long time and it is fun to be around. We went for the  party to congratulate him and the entire team of his show Comedy Nights with Kapil. I follow the show regularly in fact there must be no one who does not watch his show. He is doing really great and we wish him good luck to grow more with the show. I am personally a big fan along with being a friend of Kapil so I had to come to the party for celebrating his success."

Tellybuzz asked her that which character she likes the most from the show and she says, "If I have to answer beyond Kapil then it will surely be Gutthi  and Palak (Kiku Sharda). They doing really great and it's fun to watch them on screen."

Comedian Kapil Sharma shares his excitement on the completion of 100 episodes, "It's a great feeling. I never expected the show will run for such a long time. My contract was for 24 episodes initially. Then after the show's success, the channel asked me to continue for 50 episodes which went up to 100 episodes and now they want it to be continued till the time it is possible."

The comic show also marked the return of loved character Gutthi, played by Sunil Grover in their completion of 100th episode.

"Sunil is my favorite and it is good that he came back to the show. It will be fun now. All my characters on the show are brilliant be it dadi, palak or my biwi," Kapil said.

Hunk_KW 6 years ago There is nooo one even come close to u Karan Wahi. Loveee u alottt

dewdrops22 6 years ago
There is nooo one even come close to u Karan Wahi. Love u alottt


There is nooo one even come close to u Karan Wahi. Love u alottt