"Love is like the wind, you can't see it but you can feel it" – Nicholas Sparks
Yesterday we in TellyBuzz kick-started the Valentines Special stories,  with some lovely insight coming to us from Jay Bhanushali and Mahhi Vij.  Today we bring in another love story of one of the most popular couples, not only on screen but also off screen. Wondering who?

It's none other than the play boy and the charming Samrat and Gunjan, oh sorry!!! The handsome and beautiful, Mohit Sehgal and Sanaya Irani.

Mohit Sehgal and Sanaya Irani shares with Tellybuzz, their love and how it budded. 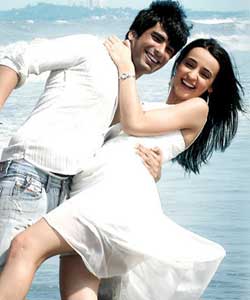 A very bubbly Sanaya speaks "We both met on the sets of Miley Jab Hum Tum when all the cast was gathered for a meeting about the show. When I was given a briefing, I was told about the cast and the guy opposite to me, but did not pay attention to that because I was more concerned about my role. I noticed a guy sitting next to me and we both looked and smiled at each other, which later turned out to be laughter. The guy was Mohit. But till date we never knew why we were laughing."

Mohit takes his turn and says "We did not plan anything and everything happened in due course of time. When I first entered the show, everything was new and it was not at all easy for me to get adjusted to the situations because it is difficult for me to adjust with strangers. And since it was my first show, I wanted everything to be good and was nervous too. And luckily all my co-actors and Sanaya especially was really helpful."

Sanaya tells about what she felt about Mohit in their first meet "In the first meet, I felt him really decent because he was not a person who talks a lot and kept to himself. When some of us were really excited with the show to take off, he did not seem to be so. Friendship happened much later and it took nearly three months for us to become friends. He probably must have felt that I was not fit in his category of friends list. Because of his attitude many people in the cast mistook him as an arrogant and an unapproachable person. Even the girl who played Sheena felt the same about him and used to tell me in my room how arrogant he was, and I used to tell her that he was not really like that because he takes time to mingle with people."

Mohit says "Because of Sanaya I have improved a lot in my approach towards people; I was very reserved and silent in the beginning."

Here comes the declaration of love…

Mohit says "I declared the love after the first season and Arjun Bijlani was the first to know because, he always used to tease Sanaya and me saying that there is something going on between me and her. Sanaya was particular that we would say it together to him as she wants to see his expression when we break the news. And finally when we told him that we want to say something, he just asked us 'what? That you guys are in love with each other?' for which we couldn't say anything because we were taken aback with his question."

Then why keep media away for so long for a declaration?

Sanaya laughs and says "We have been very particular about our relationship because we wanted media to be the last one to know it. This was because we did not want our parents to know about our relation from others. Even though matters had been published earlier about us, we did not give any confirmation and whenever the media contacted us, we used to say no comments. We officially declared our relationship on the last day of the shoot and before that we had told everything to our parents."

A very happy Sanaya goes on, "My parents were relaxed and cool about it because they know that I am very picky when it comes to boyfriends, dating and such things."

Mohit too had a same experience and happily says "My parents know Sanaya and they are happy about my choice."

Viewers are waiting for the sacred bond and to this Sanaya says "We will not be getting married very soon because more than being settled, we should also see the capability of the person who you are going to be with. Because, even if the man is well settled with hell loads of money and if the person is not capable enough to work and earn, then again you are in trouble. So we are just waiting for the right moment"

With Valentine's Day coming up, both of them did not forget to disappoint their fans.

Sanaya says "I would like to wish everyone a Happy Valentine's Day and spend it with your loved one because you have got 12 hours and don't be naughty."

Mohit says "We love you guys and miss you. I know that it's been long that I interacted with you but we assure you that we will be on screen very soon."

The love story indeed is really sweet and we hope you guys appear soon on screen to get connected with the audience and your loved ones.

Mohit Sehgal talks about the pressure of carrying forward a franchise ...

sidra14 7 years ago sanaya n mohit are so cute couple,i saw ist tym sanaya in ipkknd,that was really a great serial i watched

mrins 7 years ago Monaya is the cutest jodi
love you :*

Jasuhana 8 years ago lov u mohit sanaya :) bless u waiting 2 c mohit in a new show

dragonz 8 years ago I happy sanaya and mohit create a new blog for us.Its really cool blog.
If anyone want there personal blog then Visit my Profile for there Blog.

Anurag Kashyap responds to MeToo allegations levelled by ...
5 minutes ago