Star Plus with Sphere Origins is all set to take off its new show Gulaal Ke Sang, with a concept that was kept very cagey till now. 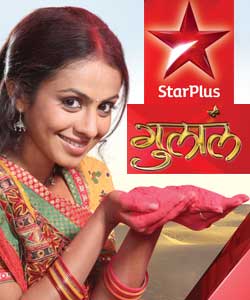 The show that has a backdrop set in Kutch tells us the story of Gulaal, a 24 year old specially gifted girl, who is befuddled in the rivalry between her village Rashipur and Talsagra. The girl, who has the gift to sense water in the arid desert, takes the bold step of going against her family to help the villagers of Talasagra to find water.

About the role Mansi Parekh says "The role is really challenging as Gulaal is a girl who listens her mind and does whatever she thinks is right. She takes the tough decisions to step against her family to save an entire village which is in enmity with her own."

Her love interest in the show is Rahil Azam who plays the character of Vasant, a resident of Talasagra. Speaking about his role Rahil says "The role is very positive and the guy has a good reputation in the village as his father is the Mukhiya. He loves kids and protects the women community and also speaks for truth."

The show has a talented cast that includes Manoj Joshi who plays the character of Motabha, father of Vasant and Natasha who plays the character of Paanbha, Vasant's mother. Sushant Singh who was last seen in Sony TV's Viruddh will be seen essaying the role of Dushyant, the cousin of Vasant and has a grey shade in him. Pankaj Tripathi will be seen in the role of Gigaji, who too has a grey shade. Getting out of her sweet innocent character 'Bhakti' in Hamari Devrani, Krishna Gokani will be seen with a completely different look and attitude in Gulaal.

The show is indeed a fresh venture for Star Plus with its concept and outlook and the team is all set to go on air.

The show will be telecast from 15 November, Monday to Friday 9:00 pm in Star Plus.

mysteriousmilli 9 years ago The concept of the show is promising......,looking forward to it.

itsnabzz 9 years ago The concept is different, looking forward for this show....

sami01 9 years ago aww good luck but will miss my bidaai and its awesome cast....cant belive a show which is slot leader in its 9 pm slot beating big boss and KBC still its ending..but wish all the best to gulal

jakther7 9 years ago Welcome back "Krishna Gokani" we r waiting 4 u.