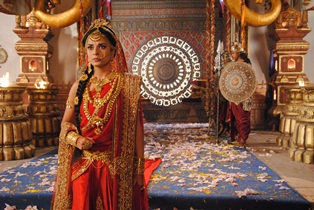 The Game of Dice is about to begin! The shrewd game that changed the destiny of India and became the premise of one of the world's greatest epics - The Mahabharata is about to unfold on Star Plus. The show that captured the hearts of viewers across the country is all set to showcase the infamous 'Game of Dice' between the Pandavas and Kauravas.

This occurrence and most talked about turning point in the epic not only provided impetus to Draupadi's humiliation but ultimately led to the 18 day Kurukshetra war for the throne of Hastinapur. However little is known about the game, its players and bets at stake!

Star Plus demystifies the Game of Dice - unraveling not only the rules that were laid but how the players were manipulated with words to get everything at stake. For the first time on Indian television, viewers will witness an elaborate Game of Dice' where the rules of the game will be set, one by one the play of emotions, cheating and manipulation that led to Draupadi's dishonor will unfold on your television screens. A fair player who gets entangled in the rules of game, an ace gambler with evil intentions and magical dice, a court full of royalty that witnessed the humiliation of a woman, inadvertently set the ground for the biggest war in the history of mankind!

What were the rules of the game? What happens between Pandavas & Kauravas during the Game of Dice'? Did you know that Pandava's wealth and Indraprastha were not the only possessions at stake! What led Yudhistir to put his honor, his integrity and at last, his wife Draupadi at bet? Did Duryodhan put anything on stake at all?

RamKiSeeta 6 years ago This track is about 70% accurate and has many faults in storyline, but the acting of the cast is simply superb! THEY are the only reason I sometimes watch this show, because the storyline has MAJOR faults, some of which are unforgivable in the way they malign the characters.

rumpi_g 6 years ago mahabharat is the best show now on TV. the current track is jst suprb

Vinder90 6 years ago watching dice game in such detail is a very mentally and emotionally draining time.for.me, esp as it is paid out across quite a few epis... I now appreciate other depictions of his key moment, eg in sanjay khan Mahabharata on zee if I remember that covered this painful event in under 2 one hour episodes

bunnylovessunny 6 years ago Genuine or not this show has me glued to my television screen!! Great job by everyone :D It looks so splendid, these actors are who I'm going to remember all throughout whenever Mahabharat is mentioned. Pooja Sharma is simply brilliant!

Sea-Hawk 6 years ago this is the worst portrayal of dice game over .. Duryadhana never bet on his friends or wife .. it was Yudhisthir who gambled over his brothers n wife. Shame on u CVs for such discrimination

immaria91 6 years ago ths part is killing my heart a lottt!!!

starsshinex 6 years ago This track is making me cry so much! :'( Mahabharat is an awesome show and the cast is doing an amazing job! Love the show!

Deepika Padukone likely to be Summoned by NCB for ...
31 minutes ago