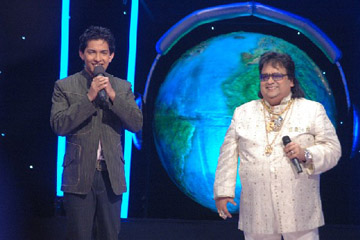 As already reported earlier in the weekly summary, this Friday the episode we will begin with Bappi da singing "ek lo ek muft" from 'Guru'. He will be then joined by Ashaji who sings "raat baaki" from 'Namak Halal'. After this scintillating performance by the doyen of Hindi Film music we will also get to hear Vishal and Shekhar who are going to sing "Mumbai nagariya' from 'taxi no. 9211'. If you are thinking this is the end to the performance by the celebrities, then you are wrong.

Aditya fans, something for you all to cheer about. Ashaji will be singing a beautiful Nepali song for him when he welcomes her. He is also going to request her to sing “Yaee re Yaee Re” from Rangeela which these had sung together. Now if Ashaji does sing or not you all need to see the show and get to know. But get ready to see Aditya blushing on stage when Ashaji comments as to how cute he is.

Show starts with performances by the Eklavya Gharana. Anita Bhatt sings “Crazy Kiya Re” and is selected by Himesh. Bappida selects the contestant from Toronto, Sumana Ganguly who will be singing “Mohe Ghar Aayi” which brings some nostalgic memories of Kalyanji for Ashaji. 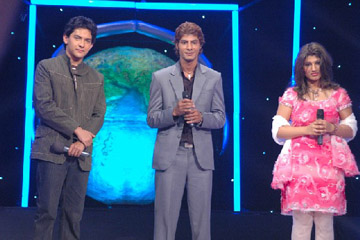 Sikander Ali from Karachi will be performing this week. He will sing “Intehan Ho Gayi Intzaar Ki” for his wife. He had to come to Mumbai after just 10 days of his marriage. The episode closes with a video showing snaps from Sikander’s marriage, a real surprise package for him.

15 years ago Wow.. sounds like a very interesting episode. Looking forward to it!