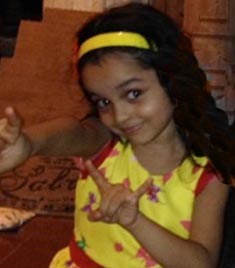 As we had reported earlier the story of Nautanki Films popular show Madhubala - Ek Ishq Ek Junoon on Colors is moving forward in great speed. While everyone in RK's family will die in the fire, the lucky survivor is his mother Radha (Shama Deshpande) and his little baby girl.

We now have more news about the same and our source says, "The baby grows up and soon you will see the small girl who will play the little Drashti Dhami. She is again named Madhu as she is a replica of her mother. Spandan Chaturvedi has been finalized to play the role of the young child. Spandan is currently seen in Sanskaar - Dharohar Apnon Ki as Aarvi and is an adorable, cute kid."

That's not all adds our source, "Also a new character will be introduced who will be seen as Radha's neighbor. She will be a much needed friend to Radha in the new city where she will need all the guidance and support."

We got in touch with Spandan's father who acknowledged saying, "Spandan is doing the show and will be seen as the little girl Madhu. She has already started shooting for the same." Renu13 6 years ago Drashti u look so cute in new avatar...
after leap epis are nice..