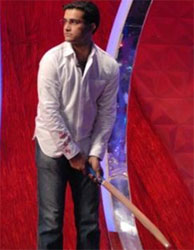 The rumor goes that Saurav Ganguly had an extremely filmy marriage to wife Donna. Well, the prince of Kolkata has a different story to tell altogether, as he graces this weekend's episode of Oye... It's Friday on NDTV Imagine.

According to our source, "The cricketing legend clears the air by saying that it was media that created the hype. In reality he took a decision of getting married to his childhood sweet heart which was considered taboo in his house, as love marriage was not allowed back home. But Saurav being his usual self was adamant enough and his family had to give in".

On live stage, there was a heart warming performance by Sanjeeda Sheikh. "She was fabulous as she danced on the latest hit of Delhi -6, Masakali...", adds our source.

Well, all's well that ends well, as Donna and Saurav are living happily ever after!!

Get much more facts cleared from the man himself only on Oye! It's Friday! With Farhan Akhtar this Friday, February 27th, at 10 PM only on NDTV Imagine... 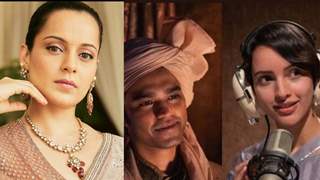 13 years ago wawwwwwwwwwwwwwwwwwww great i am waiting for that episode thanks for posting here i am sourav''s big fan ya it is true they both r childhood lovers.
any body tell me after friday when that programme repeat telecast will be there please tell me

+ 5
13 years ago I remember when I went to India back in 2000, this guy was every where, and every one I knew was a fan. All my girl cousins couldn''t stop drooling, and I have to admit that I tolerated a match of Cricket for an hour just for him. Then he kind of disappeared.

I am excited for the episode

13 years ago Wow Dada on Oye... That is going to be some treat :-D Cant wait to see him in an informal setting

+ 4
13 years ago looks like OIF is cost cutting too. from bollywood starlets they have started moved to telly actors for the performances. lol!