Indian Idol has finally got its first 'Female Winner' in Sourabhee Debbarma. 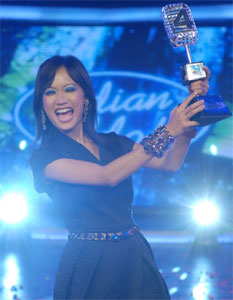 March 1st will be remembered forever in the history of Sony's very popular singing reality show Indian Idol, as this is the first time in four years that a girl has been awarded with the most coveted Indian Idol trophy. The results were declared by the stunning cast of the upcoming movie of Kabir Khan, 'NewYork', John Abraham, Katrina Kaif and Neil Nitin Mukesh. Torsha Sarkar was declared the second runner-up while Kapil Thapa, the Singing Soldier was adjudged the first runner-up of this season's Indian Idol.

Sourabhee Debbarma got a thunderous applause from all gathered, when she was declared as 'Indian Idol 4'. The Grand Finale was indeed star-studded with a fabulous gathering of contestants from all the four seasons. There were breathtaking performances by Abhijeet Sawant, Rahul Vaidya, Prajakta Shukre, Amit Paul, Monali Thakur, Meiyang Chang, Rajdeep, Prasenjit, Ankita, Parleen, Abhishek and many others..

Kailash Kher rendered his best numbers with the top 3 finalists, Sourabhee, Torsha and Kapil giving him company. The nite was graced by the present season judges Annu Malek, Javed Akhtar, Sonali Bendre and Kailash Kher. Along with them were also present last season's judges Udit Narayan and Alisha Chinoy.

The great musical combination of Annu Malek and Javed Akhtar came up with a very sensuous Anthem for Indian Idol which will be remembered forever. It was a treat to watch contestants and judges of all the four seasons sing dressed in pure white.

The Red Carpet before the Finale was hosted by the ravishing Deepali Kishore, while Mini Mathur who was missed dearly this season, bounced back to host the Finale along with Hussein and Chang.

Sourabhee Debbarma won the mighty contract worth One Crore, a fabulous Tata Winger and the coveted Indian Idol trophy. It was a Dream come true for Sonali Bendre with Idol getting its first ever 'Girl' Indian Idol...

Three cheers to Sourabhee on her stupendous success..

sunshine93 11 years ago YESSS!!! i love her. she completely deserved to win :D