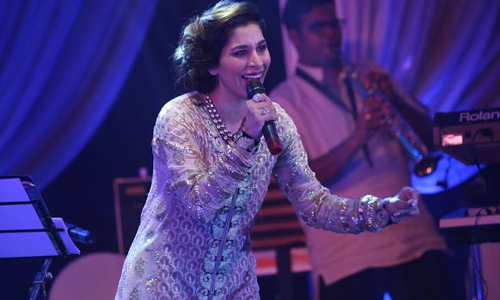 Actress, singer and former VJ who has created a rage in Jhalak this season was seen singing on the finale day of a Gujarati community event.

We hear that Sophie sang the very popular folk song "Indhana Vinwa" which she learned overnight. In fact, Sophie also donated to the welfare of musicians fund which is the reason behind Guajrati Jalso, the show.

Sophie says, "It was an honor to perform on a night where Roop Kumar Rathod, Usha Mangeshkar, Shantanu Mukherjee (Shaan) were all performing for a good cause and it felt great to get  such an amazing reaction from the audience.  I'm not adding the song to my live shows!"

And we hear that the audience was cheering 'once more' 'once more' after Sophie's performance. And yes Sophie was also a visual treat as she was looking stunning in a beautiful dress by Pakistani designer Sana Safinaz.