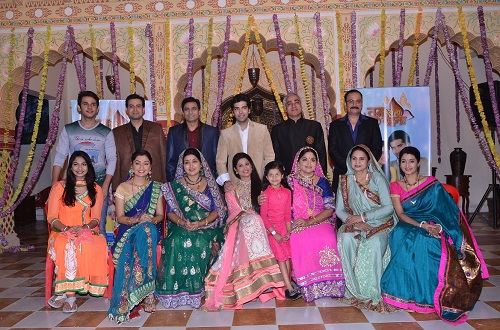 Ace producer Rashmi Sharma who is known for making popular shows like Saath Nibhana Saathiya, Sasural Simar Ka, etc. is all set to bring forth another refreshing show for the audience on Sony TV. Rashmi Sharma Telefilms' has launched its new show Tum Aise Hin Rehna yesterday which will air on Sony TV.

It is said that 'love changes after marriage especially when it comes to guys'. The story of Tum Aise Hin Rehna will revolve around this popular saying and will try to project through the show whether it's a truth or a myth. Based on the backdrop of Rajasthan, the Maheshwari family will be a happy joint family. Abhimanyu's (to be played by Kinshuk Mahajan) mother is looking for a perfect girl for Abhimanyu. They find the perfect girl in Riya (to be played by Shefali Sharma) who is a doctor by profession. Riya will get married to Abhimanyu and enter the Maheshwari house where girls are not allowed to work. It would be quite interesting to watch whether Abhimanyu will support Riya or not.

While the good looking actor Kinshuk Mahajan and pretty actress Shefali Sharma will be playing the leads in the show, the show has also roped in popular names like Meenakshi Verma, Indra Krishnan, Sanjay Gandhi, Namrata Thapa and many more. Businessman turned actor Ankur Ghai is also making his debut to acting through this show.

Well, we wish all the best to the team!

anjumluvkinny 6 years ago Kinshuk n Shefali going to rocked as a new upcoming jodi.all the best to whole team for new venture.

trinilisa 6 years ago The wait is almost for your come-back KINSHUK MAHAJAN !!

All the best to everyone in Tum Aise Hi Rehna !!!

Missed you so much Kinshuk Mahajan.
Also excited to see Indira Krishnan once again as your Mom.

A.nisha 6 years ago all the best Namrata thapa and others...

Ms.S.K. 6 years ago Hope this show gives channel a much awaited "hit" to bring it to top
.
Please tag Namrata Thapa.
.
Fans there is TB video also where Namrata being interviewed

anjumluvkinny 6 years ago Best of luck to whole team of Tum Aise Hi Rehna,inshallah this show would definately loved by audience.

trinilisa 6 years ago All the best to KINSHUK and the entire cast and crew of Tum Aise Hi Rehna !!!