The 12-year-old CID, the thriller show on Sony took a step forward as it announced the CID Gallantry Awards on Tuesday afternoon. A jury of four members – actor-social activist-author Gerson Da Cunha, art and culture writer Shanta Gokhale, IBN 7 journalist Ashutosh and Kavita Karkare wife of late cop Hemant Karkare – will sieve through the entries as they pick and choose candidates to honor them for their acts of bravery.

Featured Video
The awards are categorized into Physical Bravery (bravery shown in saving life or property of self and others) and Social Bravery (shown to combat social injustices like drug abuse, dowry, child labour etc). Applicants can send in their entries through mail, online and by calling on MSM IVR number starting August 15 to October 2. The final two short listed entries will be awarded the CID medallion and cash prize of Rs 1 lakh and Rs 50,000 respectively.

The show produced by BP Singh and Pradeep Upoor has been going from strength to strength and the makers believe that the Gallantry awards which will be an annual feature will only support the cause. 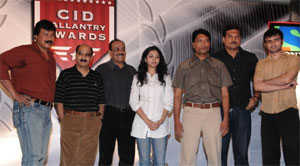 At the press conference to announce the same while Da Cunha congratulated the CID team and said it was a brilliant show and the Gallantry Awards an even more brilliant idea, Ashutosh said he didn't think highly of the nation's CID team "as most often than not they botch up the cases given to them", though he was a big fan of the show and it was the only one he "sat and watched on TV."

Kavita Karkare choked on her words when a journalist wanted to know if she had decided to carry forward the work left unfinished by her slain husband Hemant Karkare. She said while she's carrying forward the legacy left behind by her husband, she and her children are yet to come to terms with the loss.

Sony COO NP Singh said that they decided to take CID a step forward as they believed the show not only entertained viewers and fetched good numbers but also had a social conscience. "There are many storied of bravery and courage which go unheard and untold so with the Gallantry awards we intend to bring them out of the hiding and give them their due, encourage them by awarding and honoring their acts," said B P Singh.