View Profile
What happens when a world renowned choreographer happens to loose a few moves? 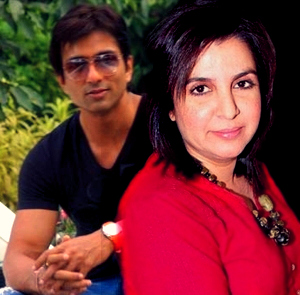 Successful director, Farah Khan was been roped in by the Khans to choreograph the last minute item song addition going by the name 'Munni Badnaam Hui' for their upcoming home production, Dabangg, featured on the ravishing Malaika Arora Khan and actor Sonu Sood. However, the award winning choreographer found herself stuck when trying to come up with a few moves for a portion of the song.


And guess who came to save the day?


Sonu, at that time happened to recall a hilarious dance an uncle of his used to showcase on drunk-and-out party nights! It involved certain hand and foot movements that reminded Sonu of someone driving a scooter, and the team hence fondly christian the now adopted notorious dance sequence as 'the scooter dance'!


Sonu, who has been conveniently well practiced with this 'scooter dance' through the days of college, delinquently performed it for Farah. The special dance had the entire cast and crew in stitches and Farah immediately decided to incorporate the steps into the song.


If anything, we're certain this 'scooter dance' is to become the signature move for many-a-parties in times to come!