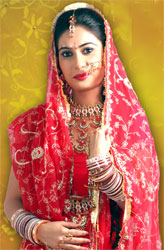 Sonia Kaur, the Kashmiri girl who was one of the contestants of Imagine's Rahul Dulhaniya Le Jaayega has shown a penchant for acting, and will be seen in an episodic in SAB TV's Maniben.com.

According to our source, "Sonia Kaur will soon be entering Maniben.com. She will be seen for one episode. The ongoing track is about Iyer aka Ashiesh Roy, a London returned MBA boy who is presently working with the retired army colonel, played by Anjan Srivastava. Iyer has in fact fallen in love with Maniben (Smriti Irani), but he will have a heart break when Maniben declares that she is married. Mani will then convince Iyer to look for a suitable girl and get married. This is when Sonia Kaur will make her entry; she will play the character of Chandramalla, a South Indian girl. Iyer will fall in love with her as soon as he sees her".

We tried calling Sonia Kaur, but could not get thro' to her.

I agree!!!!But they all came for their career only!!!!