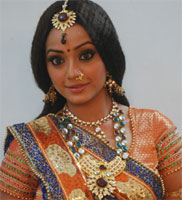 Soni Singh who got popular for playing Jhanvi in Ghar Ki Lakshmi Betiyaan is back with yet another role on Zee TV!!

The actress will be seen donning the avatar of a Vishkanya in Jhansi Ki Rani.

According to our source, "She plays Shwetambara, a Vishkanya who impersonates a rajkumari on behest of Janki Bai. She will be presented by Janki Bai as an ideal bride for Gangadhar Rao (Sameer Dharmadhikari). Janki bai stresses on the fact that Jhansi needs a Rani and since his kundali matches so perfectly with Shewtambra's, he should not waste time. Gangadhar Rao assents to the proposal of  Shewtambra in the light of British policies and constant pressure of an heir, but he takes time by requesting Shwetambara to be part of his play as Maneka".

When contacted, Soni Singh says, "I'm thrilled about my new character. I think its going to be very exciting to play the role of a Vishkanya. I have been given a very exotic look replete with long curly hair, large kohl laden eyes and kundan jewellery to suit that era. I just pray that I'm successful in playing the character convincingly.."

pradeepraghavan 13 years ago She was my favourite right from her role of 'Kajal' in Teen Bahuraaniyaan.

+ 7
13 years ago zee tv always makes this girl lucky by always offering her job like her from jhanvi.

she's a really good actress, nice to see her back on zee

+ 2
14 years ago i am just amazed on readin this piece...its so true music has no boundaries..and tagore surely had lot of admirers in the west even when he was alive