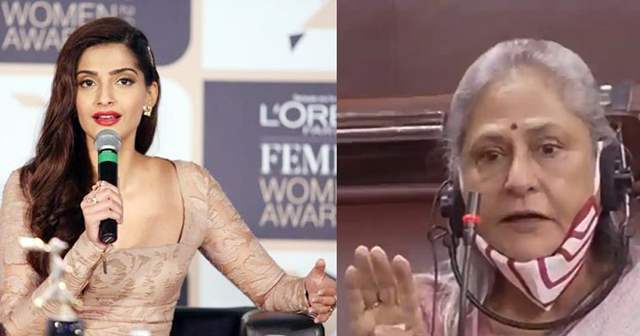 Sonam Kapoor Ahuja has reacted to veteran actress and MP Jaya Bachchan’s statements that she made in the Parliament today.

During her speech, Jaya slammed all those trying to ‘tarnish the image of the entire industry'.

Soon after Jaya's statements went viral, a lot of Bollywood actors came forward in her support, and the recent one happens to be actress Sonam Kapoor who not only expressed her complete support towards Jaya but also revealed her desire to become like her when she grows up.

While filmmaker Anubhav Sinha lauded Jaya Bachchan for standing firmly and speaking her mind, Sonam retweeted his post and wrote alongside: “I want to be her when I grow up..”

Farhan Akhtar also lauded Jaya Bachchan and shared, “Respect. She has always stood up to be counted when it mattered.”

In her statement on the second day of the Monsoon Session in Parliament, Jaya Bachchan had said, “Just because there are some people, you can't tarnish the image of the entire industry. I am ashamed that yesterday one of our members in Lok Sabha, who is from the film industry, spoke against it. It is a shame. People in the entertainment industry are being flogged by social media. People who made their names in the industry have called it a gutter. I completely disagree. I hope that govt tells such people not to use this kind of language.”